by Christina DesMarais on December 20, 2011
in Phones and Mobile, Cell Phones, Guides & Reviews 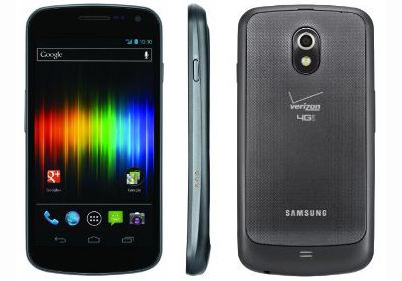 The Samsung Galaxy Nexus has been the most hyped smartphone lately because it’s the first one to be released in the United States with Android 4.0, or Ice Cream Sandwich (ICS), on board. This is big news because ICS is completely unlike previous versions of Android. Google has given nearly every facet of the operating system a makeover resulting in an entirely new—and fantastic—Android user experience.

The new 4G LTE phone does have a few things working against it. It’s missing Google Wallet in spite of having Near Field Communications (NFC) capability. Also, some people are going to consider the size of the Galaxy Nexus a downfall. And probably everyone will wish it had better battery life.

In spite of those knocks, I highly recommend the new LTE phone for Verizon customers. Read on to find out why.

The Galaxy Nexus is a humongous phone, which is the biggest factor that will play into how much you like, or dislike, pawing it. At 5.29 ounces it’s somewhat heavier than the Samsung Galaxy S II, which weighs 4.6 ounces. It’s a bit longer and barely a titch thinner than the Galaxy S II with dimensions at 5.33” x 2.67” x 0.37”.

The body on this phone only has two buttons—a power button on the right side and volume control on the left side. The placement of these buttons can actually be a bother since you need to use the power button to wake the phone up. If you try to do this with one hand you can end up pushing both volume and power at the same time, which can be annoying.

And because the phone is nearly button-free it can be tricky at first to know which end of the phone is what when you first grab it. What helps a bit with that is a slightly beefed up bottom end with a distinct edge where the plastic and textured back cover meets the phone’s body.

Overall, it’s a monster of a phone, so people with small hands might have trouble. People who spend a lot of time browsing or using apps may love the size. I count myself in the latter group.

The Samsung Galaxy Nexus has a slightly curved 4.65-inch Super AMOLED capacitive touchscreen (720 x 1280 pixels) to thank for its huge size. A small circle on the very bottom of the screen glows when you receive messages, email or notifications. Upon powering up you’ll notice bright, vibrant colors and super sharp text.

The built-in speaker on the Galaxy Nexus was sufficiently loud to listen to music if you’re sitting right next to the phone or talking to someone on speaker. Standard calling volume was usually adequate, although at times I found myself straining (slightly) to hear someone with whom I was talking with the phone up to my ear

Verizon’s 4G LTE network isn’t available everywhere, but where it is, you can expect lightning quick download and upload speeds of about 5-12 megabits per second (Mbps) on the downlink and 2-5 Mbps on the uplink in real-world, loaded network environments (see: The Fastest 4G? It's No Contest for an idea of how much you get with a 4G versus a 3G phone).

That 4G speed combined with the ICS operating system and the Galaxy Nexus’ powerful 1.2 GHz dual-core processor results in a phone that is extremely fast. Many apps I grabbed from the Android Market downloaded in just a few seconds.

That blazing-fast speed, along with the large and beautiful display makes for an excellent browsing experience that’s better than you’re going to get on most other handsets.

For an upcharge on your Verizon bill the Galaxy Nexus can act as a mobile hotspot for up to 10 other devices.

The 5MP rear-facing camera on this phone isn’t going to be the best one you can get on a smartphone. Even so, I think it works very well and will be a marked upgrade for anyone coming from an older handset. It autofocuses on faces and with a tap on your screen will very quickly focus on what you’re asking it to and then shoot with no shutter lag. And there’s a built-in suite of editing tools in the photo gallery, which is fun to play around with.

As for video, the Galaxy Nexus shoots in three resolutions: 1080p HD, 720p HD, and 480p, offers several time-lapse intervals and lets you use the flash as a modeling light. You can also play around with adding many different and zany special effects to your videos. It also lets you capture a still shot while recording a video by tapping the screen.

The Samsung Galaxy Nexus makes use of Android 4.0, a.k.a. Ice Cream Sandwich, which is completely different than previous versions of the operating system. The well-polished interface is now dominated by blues and grays and makes use of new transitions and animations.

The home screen includes a favorites tray that remains on the bottom of the screen as you swipe it between panels. In that tray you’ll find a permanent link to your app drawer and four icons of your choice. Android 4.0 also now has a search box that hangs out at the top of the home screen. You can use this to search the Web and your phone, or tap its microphone to use your voice to tell the Galaxy Nexus to do things like place calls, send texts or emails or get driving directions.

It also has some interesting, if not gimmicky, features such as Face Unlock which can be set up to look at your face to make sure it’s you before unlocking the phone. It works well if you want to pull off a parlor trick for your friends, but it’s actually not as secure as using a PIN or password since Wired has proven that a person could use a picture of your face to dupe the facial recognition technology.

One thing that might annoy you if you were hoping for a clean version of Android is that the Galaxy Nexus ships with several Verizon apps installed on the phone, such as My Verizon Mobile, Verizon Login, VZ Backup Assistant and VZWAPNService. If it bugs you, though, it’s just a matter of going to Settings, Apps, All, then selecting “Force Stop.” After rebooting you shouldn’t see any side effects except for the apps are no longer in the app drawer. And they seem to stay hidden after a reboot.

The Google products that come loaded on the phone include Gmail, Google+, Google Calendar, Google Music, Google Maps and Google Places so heavy users of these products will like how the phone checks you into your Google account and syncs content from different apps to and from the cloud. For instance, make a change to your Google Calendar on your desktop and it’s automatically made on your phone. Or if you want to get music from iTunes onto your phone you can upload it all to Google Music which then syncs it over the air to the Galaxy Nexus. This is data-hogging process, however, so if you’re on a capped broadband plan, you’ll want to use the phone’s micro USB cable instead to offload music from your main computer to the Galaxy Nexus.

The Samsung Galaxy Nexus has 32GB of onboard memory but does not have a card slot for expandable memory.

Like many smartphones on the market, the battery life on this one isn’t great. Really, these things are more computer than phone so you can’t expect them to keep juice for days on end like you could with a simple flip phone. That said, there are a few things you can do to keep a charge longer on the Nexus.

First, 4G LTE is a battery hog. If you’re only making calls, texting or using navigation, switch to 3G CDMA. You can also install a battery saver app such as Juice Defender.

The Samsung Galaxy Nexus is available from Verizon for $299.99 with a new, two-year contract. Or, for a limited time you can purchase it from AmazonWireless

for $189 with a new two-year contract, although as of Dec. 21 the phones are backordered there and take 8-9 days to ship. The unlocked version has been selling online for $799, but both Best Buy and Newegg are now sold out..

If you want a top-of-the-line Android phone and you don’t want to wait for Ice Cream Sandwich to roll out to your current Android handset (which can take a while), this is a good bet, especially for those who do a lot of Web browsing and video watching. The large and beautiful screen makes doing so a uniquely rewarding experience. And the Samsung Galaxy Nexus is an extremely fast phone if you’re in a region where you can pick up 4G.

In all, its virtues far outweigh its few faults—namely, the lack of Google Wallet and a battery that needs a bit of coddling.

Looks like the cut&paste monster is at it again!  The laptop dock section looks like a leftover from the Razr review.

Thanks Michael! Fixed. And yes,

Thanks Michael! Fixed. And yes, I do sometimes just clone an existing story and paste in the new text and images.

Can you please tell me what the LED’s (if they are) are for at the top of the G.Nexus near the speaker?  And if so, can I change the notification led to the top of the phone?

This phone cannot even last for 4 hours on original battery! I can’t even consider the original battery to be a viable option for use.  Perhaps update 4.0.4 can address this issue but highly doubt it