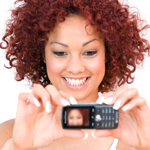 Chances are, you’ve probably been carrying a phone that has a camera for quite some time now. Only recently, however, has that technology advanced sufficiently to start taking it seriously as a camera.

These days you can get a high-quality 5MP model for free if you shop for a deal. They have decent lenses, flashes that don’t make people look ghastly, auto-focus, scene modes, special effects, to name a few of the features. Though keep in mind that the lenses are still no match for a regular camera. And an optical zoom, the only one that counts, is pretty much nowhere to be found.

Though you’ll have to work harder to get good images with your phone than you will with your point-and-shoot, it is possible. Here are a few tips that will deliver better results the next time you take photos with your phone.

Aimee Baldridge is the author of The Camera Phone Book

and Organize Your Digital Life

, both published by National Geographic.

A technology journalist, photographer, and consultant based in New York, she has specialized in working with digital media technology since the turn of the century.  Baldridge is a contributor to numerous photo and technology publications, and has covered camera phones for American Photo and Popular Photography & Imaging magazines.

Nice hints, but I guess

Nice hints, but I guess geotagging and then uploading images, right from a phone, is not a case if you want to keep your online privacy.

you didn’t explain how to check if your cell phone is on the highest quality settings..thanks