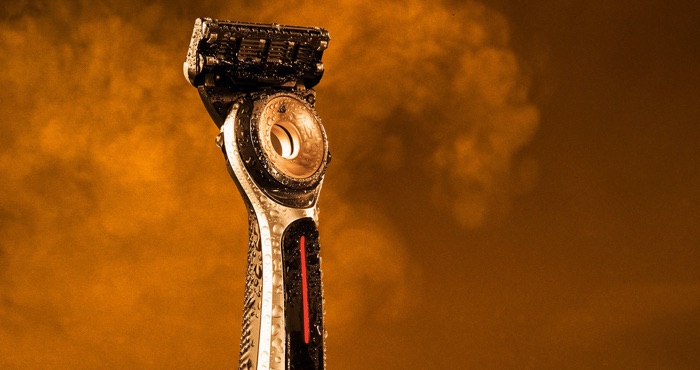 Shaving just a got a little posher with the newest digital innovation from GilletteLabs: the Heated Razor. Though it was shown as a prototype at last year’s CES, at this year's convention the luxury razor was functional and available for purchase.

No, the razor couldn’t fit any more blades, so you’ll have make do with the standard five. The true luxury of the device lies with the gold bar beneath the blades, which heats the razor up to simulate a hot towel shave. The technology allows for a steady heat within about a second — just press the button and a blinking LED light will alert you when it’s ready. You can also toggle between two temperatures (either 109°F or 122°F) depending on your shaving preference, and four heat sensors prevent the razor from overheating.

Out of the box, it needs to be charged for about an hour on its base dock. It charges wirelessly and each charge lasts about six shaves, so there’s no hassle to keeping it powered up. And of course, it’s waterproof.

You can buy the GilletteLabs Heated Razor now. A Starter Kit comes with the Heated Razor, charging dock and two GilletteLabs blade cartridges for $200. If you’re worried about running out of replacement blades, you can also subscribe to have them automatically shipped every month, three months or six months at $25 per four-cartridge pack.

If you want to grow fast, you need external help to get attention from Instagram. You need to cultivate relationships with power users in your niche and borrow their influence.
These ideas to earn through online business are just the tip of the iceberg. There are lots of other ridiculous ways to make money. For example, don’t want to do live trading? No problem! Simply start a YouTube channel about CFD and you are all set to make money. You will never know unless you try!
Head over to Transcribe Anywhere for a FREE transcription mini-course . This course is designed to help newbies learn precisely what transcription is and how to be successful working from anywhere. I was entirely new for transcription just like you, and this course is one of the few I highly recommend – and best of all, it’s FREE! Sign up for the course and start learning today! Good Luck ??
For an authoritative way to sell on Amazon and source profitable inventory, check out the suite at Inventory Lab.
Granted you probably will not make a living off of just a few videos. Be prepared to make over 100 videos if you really want this to take off.