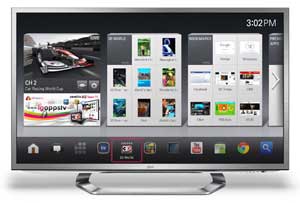 The most jaw-dropping TV in the LG presentation at the Consumer Electronics Show was clearly a 55-inch OLED set with picture quality so striking it was nearly impossible to look away. With intensely dark black levels and rich, vibrant color, OLED delivers picture quality that leaves plasma and LCD far behind.

While LG scored major points developing an OLED screen bigger than any ever seen, it’s still a long way from being an actual product – no pricing or availability was announced. But for TVs available in upcoming months, the most interesting is a smart TV system that uses voice control and body gestures to make short work of search and menu navigation.

The company claims to have 1200 apps available for download to its smart sets, so navigation is becoming an increasingly important issue. The controller shown during the presentation looked very much like Microsoft’s Kinect system, and the functions seem similar to those available in the Xbox 360 console, though there was no mention of a licensing deal.

LG also announced they will join Sony and Logitech in supporting the Google TV system, recently upgraded to support downloadable apps via the Android Market. There will be two series of Google TV-equipped sets shipping later this year.