New MacBook Air is Slimmer and Faster than Ever 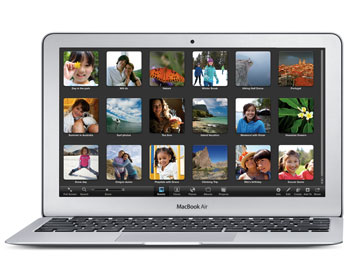 Apple launched it's new version of the MacBook Air notebook line with 11-inch and 13-inch models. Both versions share a super-slim design (only 0.68 inches at its thickest point and an amazing 0.11 at its thinnest) and weights (2.3 lbs. for the 11-inch and 2.9 lbs for the 13-inch) that are competitive even against netbooks.

But if you think the MacBook Air is all about beauty and not brains, you'd be wrong. Both models feature Intel Core 2 Duo processors, 2GB of RAM (upgradeable to 4GB for a reasonable $100) and rely on speedy flash drives in place of a traditional hard drive. The processors aren't the fastest, but should be more than adequate for most owners. Also on-board is a dedicated NVIDIA GeForce 320M graphics card that will easily drive graphics heavy applications, including games.

Those flash drives offer some additional benefits beyond speed. Because flash storage doesn’t have any moving parts, it tends to be more reliable than traditional hard drives, especially in a travel computer that tends to get banged around. And the flash drives give the MacBook Air instant-on capabilities after placing it in suspend mode (I'm drooling over this one as I think of the 3 minutes 30 seconds it now takes my PC to boot up), and it can stay in standby mode for up to 30 days running just off the battery.

Apple also took advantage of the extra space provided from using flash storage to increase battery size. Claimed battery life is up to 5 hours on the 11-inch MacBook Air and 7 hours for the 13-inch model. One drawback, though, is that flash drives are very small compared to traditional drives. The entry level 11-inch model comes with a 64GB drive and even the high-end 13-inch model has only 256GB of storage.

Other goodies on the MacBook Air include a multi-touch trackpad, a FaceTime camera (which I assume would work just as well with Skype, too), DisplayPort adapter and Wireless-n networking.

What's always been missing on the AirBook is an optical drive, which is becoming less and less necessary as more software and content can be downloaded from the Internet, and built-in 3G/4G broadband. And with no built-in Ethernet port, travelers might want to purchase the $29 Ethernet Adapter.

Pricing starts at $999 for the 11-inch model and $1,299 for the 13-inch. Not too bad given the exceptional form factor and solid performance specs.

JoshTo fully do a review

To fully do a review on a machine like this, I would love to see what it costs to set it up for real usage - such as the software that must be added to make it purr.  What is the new Office software costing now?  With no wireless card built in, how do we get online?  Etc….

Is this really an alternative to my next Dell?

If this is going to

If this is going to be your main machine, I would definitely spend the extra $100 to take the RAM up to 4GB (a must if you plan on running Windows, too).

If you have to run Windows programs, Parallels will run $80. I recommend you go with the 13” if you’ll be running Parallels because of the faster processor, and 4GB of RAM is a must.

Finally, malware protection.  Many out there would say you don’t need malware protection on a Mac.  I would respectfully disagree.  Norton for Mac ($80) will help prevent phishing scams and fraudulent websites/software, in addition to (hopefully) stopping any malware that may come out for Macs.  But users complain of resource issue with Norton on the Mac.  Wish there was a clearer recommendation for you.

The Macbook Air does have a Wi-Fi card built-in, just not a 3G (celluar) wireless card.  But you can always tether it to a 3G wireless hotspot either on your smartphone or a standalone device, as many people do.

Great preview. I think you're

Great preview. I think you’re spot on. MS Office cost come with Mac AND Windows machine, there’s no difference in that. And that’s only if you need precise compatibility with excel files, you can always have iWork for great and cheap document producing or OpenOffice or Google Docs for free document editing.