Nintendo of America issued an apology today for its bungled reaction to a campaign seeking the inclusion of same-sex relationships in Tomodachi Life, an upcoming 3DS life simulation game.

An early Japanese version of the game, released to the public, allowed for the forming of gay relationships. That functionality was declared by Nintendo to be a bug and patched – to significant controversy.

The game is finally making its way to U.S. shores this June, minus the ability to form same-sex couples. That doesn’t sit well with gay gamer Tye Marini, who started an online #Miiquality campaign to introduce female-female and male-male pairings in the North American release.

The movement grew large enough to draw the notice of Nintendo of America. And like with the earlier furor over the Japanese game, the company’s tone-deaf attempt to respond to gay gamers only made matters worse.

"Nintendo never intended to make any form of social commentary with the launch of 'Tomodachi Life,'" the company said in a statement. "The relationship options in the game represent a playful alternate world rather than a real-life simulation. We hope that all of our fans will see that 'Tomodachi Life' was intended to be a whimsical and quirky game, and that we were absolutely not trying to provide social commentary." 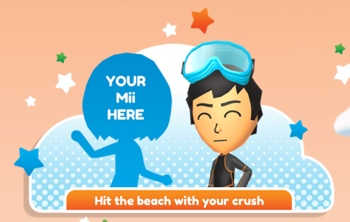 Supporters of #Miiquality took to social media and blogs to criticize and apply pressure to the gaming giant. “Ignoring the issue of same-sex marriage and relationships is the same as siding against it,” Sal Mattos wrote for Gaygamer.net. “Not including same-sex options comments that the needs, not to mention dollars, of gamers like Tye Marini aren’t important to Nintendo.”

Today, Nintendo apologized for its earlier statement and left the door open for including same-sex relationships in future versions of the Tomodachi Life series.

“We apologize for disappointing many people by failing to include same-sex relationships in Tomodachi Life. Unfortunately, it is not possible for us to change this game’s design, and such a significant development change can’t be accomplished with a post-ship patch. At Nintendo, dedication has always meant going beyond the games to promote a sense of community, and to share a spirit of fun and joy. We are committed to advancing our longtime company values of fun and entertainment for everyone. We pledge that if we create a next installment in the Tomodachi series, we will strive to design a game-play experience from the ground up that is more inclusive, and better represents all players.”

For Marini, Nintendo’s pledge represents a victory in his battle for inclusiveness. “#Miiquality has succeeded in its primary goal – to bring the issue to Nintendo’s attention in the hopes that future iterations will support it,” he said in a tweet. “We hope the success of #Miiquality will continue to influence the video game industry in general & raise awareness of other equality issues.”