by Fox Van Allen on May 14, 2013
in Computers and Software, News, Family and Parenting, Games, Video Games, Blog :: 1 comment 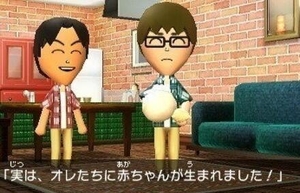 Tomodachi Collection: New Life is Nintendo of Japan’s answer to The Sims. It’s a simple Nintendo DS game released late last month without any real goals – you simply design characters, dress them, feed them, and make them perform tasks. But the game also includes a feature that Nintendo didn’t intend: It allows male characters – and only male characters – to marry and raise children.

The bug caught a lot of public attention in Japan, but surprisingly, much of the attention has been positive. Players have been flooding Twitter with screenshots of male characters on dates, in love, and even pregnant. Some have even been buying the game specifically because of the gay marriage bug.

Nintendo of Japan is putting a crimp in the fun, however. Since same-sex relations were not an intended part of the game, the company put out an update to correct a bug where, per Google Translate, “human relationship is funny.” Downloading and installing the patch seems to remove gay relationships from the game, replacing them with a more traditional kind of digital fake man/fake woman relationship between two cartoonish avatars.

While some companies have intentionally included the ability to form gay relationships in their games, Nintendo has a reputation of being a family-friendly company that won’t even let players communicate with each other save through a series of pre-approved phrases. Still, the company’s decision to disallow same-sex relationships has a growing number of Japanese Nintendo fans unwilling to download the game patch. After all, for a large number of gamers, gay relationships aren’t a bug – they’re a way of life.

“After all, for a large number of gamers, gay relationships aren’t a bug – they’re a way of life.”