The innovative Roku Smart Soundbar has a couple of new friends to play with - Roku Wireless Surround Speakers. Evolving the Roku soundbar into a full home theater system, the tonally matched surround speaker pair will hit stores and online retailers mid-February for $199 under the Roku brand name and for $149 at Walmart under their custom house brand “onn.-Roku.”

As the first product to integrate Roku’s hugely popular streaming media player software into a powered speaker system, the Roku Wireless Smart Soundbar ($179, on sale for $159 on Best Buy, onn. model $129 at Walmart) has sparked interest and support from reviewers and early adopters in recent months. This combination sound and content purveyor is plug n’ play simple to both install and use, and it eliminates redundant box and wiring clutter. It’s ideal for novice cable cutters.

Walmart cuts $50 on the onn.-branded Soundbar, in part by eliminating a second, puck-sized “table-top” remote  (“Roku Touch”) with touch-to-talk and two user-customizable presets - an added accessory which is included (along with a more conventional, standard-issue remote) in the Roku-branded soundbar package.

Early adopters have been posting that the house rocks best when the Roku smart soundbar is mated with one of two optional, wireless subwoofers. The $179 Roku model boasts 250 watts peak/125 watts RMS power. The $50 cheaper Walmart onn. model has 150 watts peak/75 watts RMS power). Similarly sized, both utilize a sealed-cube enclosure with a down-firing 10-inch woofer.

Just as with Roku stand-alone streaming content receivers and Roku-OS integrated TVs, onscreen prompts lead you by the nose, get you up and running in seconds 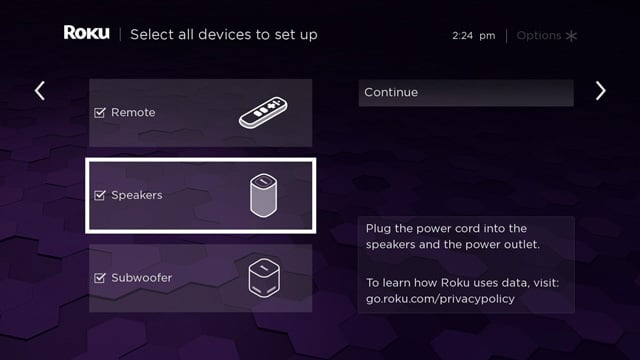 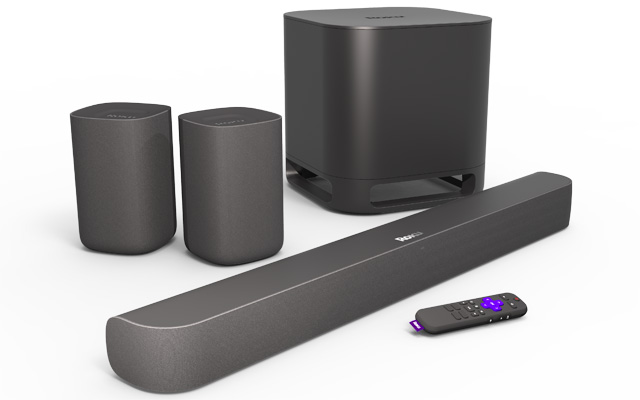 Just as with the companion Roku subwoofer, there are no wires running from the smart soundbar to the compact, two-way Surround Speakers. But each of these powered satellites must be plugged into an AC outlet.  And of course, all that streaming content requires you to have internet service coming into the house, for connection to the entertainment system via Wi-Fi or Ethernet cable.

Potentially, there’s a big buyer base for this innovative ensemble, starting with the millions who bought into flat-panel HDTVs before such devices got “smarts.”  Akin to an aftermarket car stereo upgrade, the Roku bundle invites the owner of an older (or stripped down new) high def TV to tap into hundreds of content aggregators and channels (including web-based music services like Spotify, Pandora, Amazon Music, iHeart Radio and more.) And of course, this big-sounding setup also deals with the sonic shortcomings you’ve come to discern as both that TV and you have aged.

Speech Clarity, Volume Leveling, and Late Night (dynamic range compressing) modes are just a tap away on the included Roku remote, which also manages the almighty content acquisition from Roku’s integrated streaming operating system. Voice-activated content search is also just a button push away on that remote. This home theater system can also be controlled, to a limited degree, by a nearby Amazon Alexa or Google Assistant  device.

Clearly, Roku had the surround speaker upgrade ready before Soundbar’s introduction. No software upgrade is necessary to add the new Wireless Surround Speakers. On-screen controls let you set the two-way rear speakers to either be always-on or active just when the content includes surround encoded effects. In “always on” mode, a user can select surround simulation or a “stereo everywhere” mode that duplicates the front channels in the rear. For a party experience, with a music source playing, a Roku rep suggested users could try moving the surround speakers to a different space, “like the other end of a big room.” While short on tech specs during our product preview at CES, Roku has quoted a 30-foot operating range for the system subs, which use Dual Band 802.11 AC for a customized Wi-Fi radio communication link with the soundbar. The Surround Speakers should roam at least as far from the mother ship. 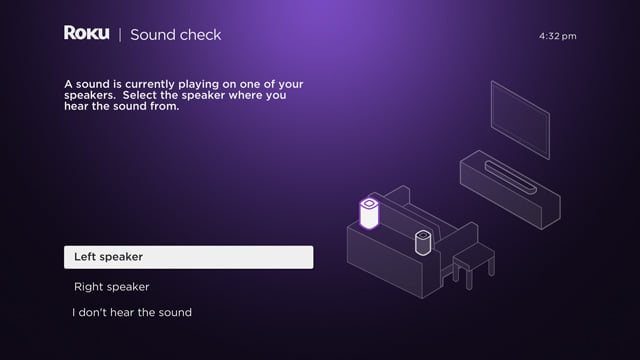 The soundbar’s rear jack pack offers just one HDMI 2.0a (with ARC audio return channel) output/input port that’s capable of passing 4K signals (often found on Netflix and Amazon) and can also feed audio soundtracks back to the speaker rig from another device connected to the TV. But that game plan presumes the TV set likewise has an ARC-output-enhanced HDMI jack – usually labeled as such. (Pre-2009 sets don’t have it.) Your other option is to use the single optical audio input port (S/PDIF) also found in the Roku soundbar jack pack. The soundbar is also equipped with a USB 2.0 input (useful with software-loaded thumb drives) and a Bluetooth wireless receiver for playing music and podcasts from a smartphone, tablet, or computer.

Collectively, a solid sounding, easy-to-operate Roku smart home theater speaker system will set you back a little over $400, if you buy the entire lot of (mixable/matchable) components from Walmart. The more sonically finessed and accessory-rich version sold everywhere else costs an extra $150.