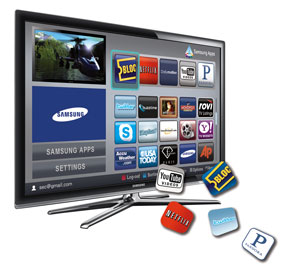 Internet connected TVs and Blu-ray players that provide access to video and photo services like Netflix, Amazon, YouTube Picasa and Flickr started showing up on store shelves a couple of years ago. And more recently, Twitter, Skype and Facebook have shown up on the big screen. But this trickle of apps is about to become a flood—at least for Samsung customers—with new upgrades to the Samsung App store.

Samsung Apps, the first HDTV-based application store, has more than doubled since its launch five months ago and aims to hit the 200 app mark by the end of the year. There’s a wide range of titles across five categories – video, gaming, social media, sports, fitness and kids—in 3D as well as 2D (Samsung announced there will be a 3D video app that will deliver 3D trailers).

Samsung also announced the release of a software kit for developers that will allow anyone to create apps for the Samsung platform. So that flood may become a deluge. 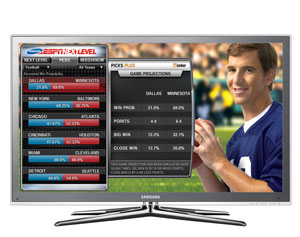 Just like iTunes and the Android Marketplace for smartphones, not all of the apps will be free. The Samsung App store will also house premium apps that will be exclusive to Samsung, including ESPN Next Level, which delivers stats, scores and player profiles. Apps will have similar pricing to smartphone apps, with some costing as little as $0.99.

There’s one small caveat. If you buy an app through the Samsung Apps store, you can only install it on one device. So if you have a Samsung TV in the living room and one in the bedroom, you have to buy two copies of the app. In cases like Netflix, where the app is free and billing is handled separately, you’ll be able to install the app as many times as you’d like for use with your one Netflix account