Is a 9.7-inch iPad 2 too big to carry around but you think a 7-inch tablet is not big enough versus your smartphone?

Samsung seems to have solved the tablet size problem by introducing the Samsung Galaxy Tab 8.9-inch tablet today at the CTIA wireless convention in Orlando. Why 8.9 inches? It's the largest size tab that will slide comfortably into the side pocket of a regulation man's business suit jacket.

Better than the iPad 2, both Galaxy Tabs boast a 2 MP front camera (iPad 2 has just a VGA camera) and record 720p HD video from the rear camera (although we didn't get a megapixel spec). Both Tabs also play back 1080p video and sport 1280 x 800 pixel screens. 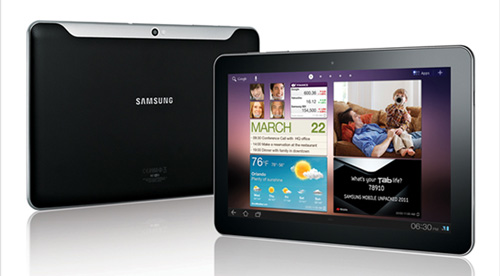 To make getting to content easier and faster, Samsung improved its TouchWiz interface. Now version 4.0, the interface offers "Live Panel" - just like it sounds, you get varying windows on your splash screen displaying varying connected activities such as social networking and messaging. Samsung also has consolidated all the communications sources - email, social networking, messaging - into a single Social Hub. Getting to apps also gets a bit easier with an Mac-like pop-up Mini Apps Tray. Instead of replacing one app with another, apps lay OVER currently running on-screen apps.

To use the Tabs as a phone, Samsung also unveiled the Samsung Stick, a pen-sized VoIP Bluetooth device that works like a skinny phone when connected to a Web-connected Tab.

I like the OS of iPad, no doubt about that but I have been always skeptical about the size. It is not something I will carry all the time or will fit always my lifestyle of not wanting bags/sleeves when I am not carrying laptop. Personally, I even liked 7” Tab so much coz it fits into Jeans back pocket and is perfect for mobility gadgets like Google maps or Layar. Also, it can be used with a single hand which is alot of convenience for my lifestyle. The only problem is that 7” is still stuck with Android ‘not-tablet’ version and thus adds not much on top of smartphone of 4” screen that I already have so I am eagerly waiting to get my hands on 8.9” to try out with the Touchwiz and specially the size from mobility point of view. I will still prefer Android over iOS coz of widgets ” I need multiple information displayed right on my screen all the time, without clicking on icons individually which is the case with iOS devices”. Thanks Samsung for making sure battery is not going in your disadvantage with these devices.