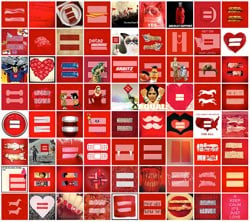 If you’ve been noticing an awful lot of red equal signs popping up on your Facebook or Twitter feeds lately, you’re not alone. Gay rights activism group Human Rights Campaign (HRC) has launched a campaign encouraging people to use the logo to show support for gay marriage – and the campaign has gone viral.

The red logo quickly spread through social networks, with people using it as their profile picture to show their personal support for gay marriage. The effort is drawing in celebrities and politicians, from openly gay singer Lance Bass to the governor of Maryland. Even singer Beyonce posted a red, handwritten note to Instagram saying, “If you like it you should be able to put a ring on it.”

Remixes of the logo began popping up almost instantly, elevating marriage equality to Internet meme status. Some replaced the equal signs with sleeping cats; others used a logo featuring two strips of bacon. If you’re interested in taking a stroll down the absurd side of a serious debate, the HRC has created a Flickr stream featuring their favorite takes on the logo. After all, no matter how high tensions rise during the case, we can all inject a little bit of civility into the debate through sleeping corgis, Paula Deen riding butter, and Statler and Waldorf from The Muppet Show.

The United States Supreme Court is currently considering two cases tied to gay rights: A challenge to the Defense of Marriage Act which prohibits the federal government from recognizing gay marriages from states which allow it, and a challenge to Proposition 8, the California amendment prohibiting gay marriage in the state. Both cases are being argued this week, though a decision may not be handed down for another couple months.