Tech-Savvy Families are the Most Optimistic 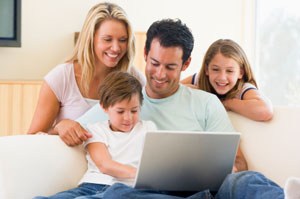 Your teenager can hold a half-dozen Instant Messaging conversations simultaneously while logged onto Facebook with ear buds plugged into her iPod. You can tweet from your smartphone and check email while enduring a boring training session. Instead of playing board games for family night, your clan gathers around an HD flat screen and chooses the best movie from Netflix, or maybe you all cozy up to your new Google TV and laugh together about the latest and greatest YouTube videos.

Certainly, today’s technology-packed world is different from what it was even a decade ago.

Is this progress, though? Are we—and our children—becoming more distracted, isolated and intellectually challenged as much of the media would have us believe? Just look at a few recent stories:

Such dreary discourse is prolific in the media, but does it truly reflect reality?

Recent research conducted by ad agency Ogilvy & Mather together with marketing research firm Communispace Corporation offers a more positive view, positing that the most tech-savvy families are more optimistic about the future when compared to their less-techie counterparts.

The study surveyed 1,200 U.S. parents with children ages 3-12 and separated them into four groups, depending on their use of technology: Tech Backward, Tech Neutral, Tech Forward, and Tech Fast Forward, with the latter made up of those who tend to use more sophisticated technology than the average person and are seen as “in the know” and on the cutting edge of technology.

Tech Fast Forward (TFF) participants tended to be well-educated, affluent, male, and more socially adept than participants in the other three categories and see technology as something that brings families closer together, whereas respondents in other groups were more likely to describe it as a barrier to family communication. TFFs also overwhelmingly answered in the affirmative when asked if their children’s generation will someday make the world a better place, as opposed to other respondents who tended to be more pessimistic.

While many people assume that children’s online relationships are superficial and not “real,” TFFs tended to see online relationships as a way for kids to “flex their social muscles” in a way that translates to real life. In fact, the TFFs were 2.5 more likely than others surveyed to “strongly agree” that kids today have higher emotional IQs (and are more able to manage their emotions to guide behavior) than previous generations.

In looking at the survey results, including its many bar graphs that demarcate the clear difference in opinions held by parents sporting the latest tech gadget and those who may not know how to text their kids, it might be tempting to want to become a TFF so as to garner some of the group’s enviable optimism. In fact, this is how the authors represent their research:

“Our research shows that a tech future is a surprisingly bright future. We are not claiming cause and effect, but we saw that the more the families embraced technology, the more they embraced life in general and the more positive they were about our future…Our thesis: Plug in to see the brighter side of life.”

Huh? Well, is it cause and effect, or isn’t it?

While we found the commentary from parents about technology highly interesting, we also see a critical flaw in this study.

In order for a person, or a family, to be an early adopter of technology and well-skilled in using it every day to make life better, such people need one, and possibly two, things to do that: Money, and a decent education doesn’t hurt either.

We propose that affluence—more so than gadgetry or a family’s adoption of it—may have a strong correlation with optimism.

It’s the same thing with education. A higher percentage of TFFs in this study had graduate degrees relative to other study participants and it seems reasonable that, in general, educated people have more opportunities, better jobs, and (you’d think) a more positive outlook.

That said, the study is well-written, engaging, and contains quotes from parents who talk about how their use of technology makes them feel younger, helps them seem more “cool,” and propels them to continuously seek out novel and stimulating educational tools for their kids.

We’re interested in your take. Is technology something that fosters communication in your family, or inhibits it? What do you appreciate about the way your kids use technology? What bugs you about their tech use? Let us know!