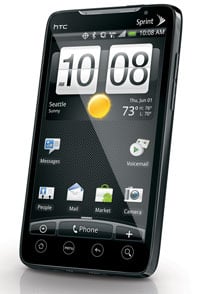 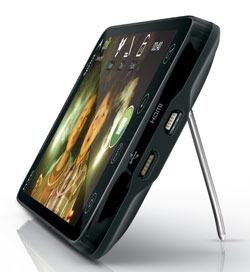 Sprint yesterday unveiled possibly the best cellphone ever, the HTC EVO 4G, the first 4G phone. Not only is it arguably the fastest Web surfing phone extant (two to three times faster than 3G phones with peak download speeds of more than 10 Mbps; peak upload speeds of 1 Mbps; average download speeds of 3-6 Mbps) but it also doubles as a mobile hot spot – it can deliver 4G service for up to eight other devices, including other phones.

Other highlights: a bright and beautiful 4.3-inch touchscreen, a 1.3 MP forward facing camera for future video chatting and game play, Google picture search (take a photo of something with the 8 MP camera and get a near instant list of results), a 720p HD video recorder, an HDMI output and wireless HD streaming to an HDTV, 16 GB of internal memory – even a kickstand so you sit it on a table to watch a movie.

But the EVO 4G is more than just the sum of these impressive parts. It's likely to be the trend-setter as more and more cities get 4G connectivity from Sprint (27 markets now, 44 by the end of this year), from Verizon later this year, and from AT&T in 2011.