by Micah Singleton on January 31, 2014
in Phones and Mobile, News, Computers and Software, Blog :: 11 comments

Technology has become a part of our everyday lives over the last 10 years. Seeing people running around with smartphones, tablets and laptops on a daily basis doesn’t even garner a second look as it did in the early 2000’s.

Unfortunately, everyone didn’t review their copy of the Common Courtesy Rulebook that should have come with their beloved devices. Annoying habits have migrated from analog to digital and it’s time for a refresher on what not to do with your tech toys. 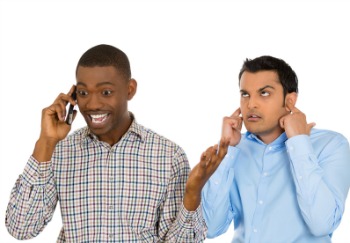 If you find yourself having a conversation while walking into the elevator, put the other person on hold or call them back. Same goes for the train and, yes, I have to say this out loud, the bathroom. The beautiful thing about smartphones is that once you hang up, you can place another call later with relative ease. Even to the same person you were just talking to. It’s magical. And far preferable to being the most hated person on your train or in your building.

Apple tried to make obnoxious tablet photography taking okay with its latest iPad commercial, but it will never be okay in my book. Unless this is the only device with a camera within 100 yards (borrow someone else's and email it to yourself if you have to), it is never okay to take photos with a tablet. You will look like a putz.

Cameras were put into tablets for two reasons: Skype/FaceTime, and for the people who ask, “why doesn’t this tablet have a camera?” As you can see, photography didn’t make the list.

This is especially offensive at concerts. Don’t be the guy holding up an iPad blocking the view of 60 people so you can attempt to capture the blurry, out-of-focus photo that you will delete as soon as you get home. You might as well flush 10 karma points right down the toilet. 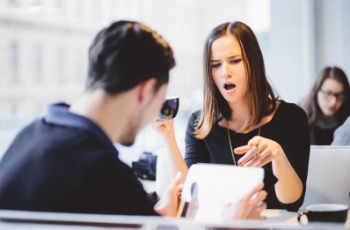 So you are sitting in your favorite coffee shop, soaking up the free WiFi rays, and you think to yourself, this is a good time to catch up on your favorite show on Netflix. In 1080p. As you sit in your chair drinking a $7 cup of cold coffee and eating an equally overpriced scone, you decide to press play on the video, and every internet connected device in the building comes to a screeching crawl. The other patrons have begun to realize the horrific consequences of your actions, as their Internet speeds come to a crawl.

As they frantically look around the room in vain, they realize the chances of locating the perpetrator are little to none. To those suffering through your poor decisions, you have become the human embodiment of selfishness. If they figure out you are the cause of this injustice, you would quickly realize the errors of your ways through the sheer evilness of the looks being thrown your way, but alas, you will continue on with your favorite episode of Storage Wars in complete ignorance.

Don’t become a social pariah just to stream your favorite show in public. If it’s available for streaming, it literally will be available forever.

As you sit in your home recovering from the party you attended the night before, you receive a text from a friend asking why you didn’t attend their get together. You make up some excuse about how you had to work late and were tired. Unbeknownst to you, the friend whose party you actually went to has tagged you in a photo on Facebook, which is now on your wall for all the world to see.

In a social world filled with little white lies, some for the good of others, and some just because you can, posting photos without permission is a grave violation of the unwritten social contract. Check with your friends to see if any lies are in progress before throwing up photos of them on your social accounts. Remember, maintaining a lie is harder than coming up with one. Pitch in, do your part. 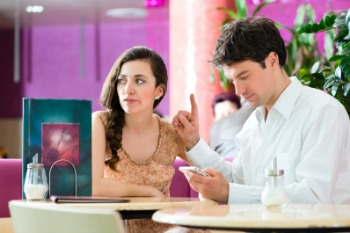 Gratuitous texting during a real-life conversation

You and I are having an in-depth conversation about something, and as you begin your sure-to-be rousing rebuttal, you receive a text message. My question goes unanswered, and our vibrant conversation comes to a screeching halt while you pound out an award-worthy thesis with your thumbs, as my disdain for your very existence grows. And now I'm forced to text you the words “LOOK UP” to shame you into acknowledging my existence.

If you have committed this egregious violation without it being an emergency, please apologize to those you have hurt. People still exist in a tangible form, and that form still has feelings. We haven’t devolved into bits of data without the concept of emotions just yet.

We must remember that we as humans still need physical contact with one another, and that everything can’t and shouldn’t be done through a keyboard and screen. Technology is a tool to be used, but using it shouldn’t offend everyone around us. Be courteous. Be thoughtful. Don’t be a tech jerk.

If only more loud cell

If only more loud cell phone talkers were like the one in the photo. The most egregious ones are the people walking around with the phone on speaker held a foot in front of their faces. All I can figure is fear of RF emissions.

Left out the most annoying and dangerous habit. If you aren’t the president or coaching somebody thru some life saving emergency your conversation/text in NOT important enough to risk your life or others around you by doing it while driving!!

I couldn’t agree more. I’ve written similar posts to this one. Why do people think that technology gives them an excuse to throw all social manners out the window?

Actually, I find that the

Actually, I find that the tyranny of the telephone has reached the acme of rudeness with the cellphone.  Why does the call have a higher priority than the conversation - or meeting - or dinner party that I am having with you? Especially egregious is the habit of answering the ‘phone without the courtesy of “Do you mind if I take this?”  And if you don’t have to take it, park it and call back later.

If someone actually bothering to

If someone actually bothering to ask if it’s OK to take the call makes it worse for you, you have a personality disorder.

Where is our society going?

The kids today text one another when sitting next to that person. Texting consists of writing in a kind of short hand: f2f, LOL, ROTFL, and so on. These are the people who are going to be heads of corporations, business owners, government officials. Where is the person who was hired to ring up the sales? Or the one who was hired to sell? Probably sitting in the unkempt park texting his/her best friend who is sitting right there.

It's called keeping their conversation

It’s called keeping their conversation private. They were probably making fun of that old fart Jill getting all huffy over their texting. If they were chatting openly you’d be complaining about the racket they are making.

You can block people from tagging you in photos without your permission. You then have to give permission for photos to be posted to your timeline. You can also remove tags from photos you’re tagged in. That doesn’t stop other people from seeing the photos on the page of the person who tagged you, but it does prevent them from being posted to your page without your knowledge.

6. Stop being judgmental arseholes about other people’s habits when they don’t affect you.

Four of these are OK (albeit nothing new), but you’re the putz for worrying about someone taking a photo with a tablet (outside of your cherry picked concert example). What concerts even allow recording, anyway?

Obviously if someone is doing that it’s because that’s the camera they have at the moment. Many tablets have cameras on the front and back for just that purpose.

There should be a draconian ban on any noun containing the suffix ‘licious’.

Well, I hope we can be grandfathered in !