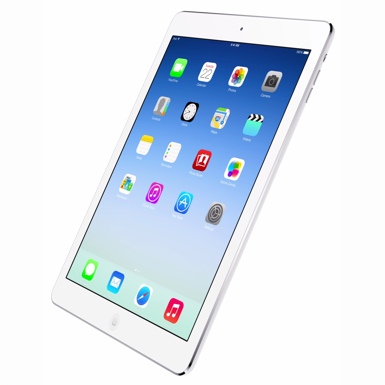 Today, at a press event in Cupertino, Apple introduced the two new additions to its signature iPad line of tablet computers: The new 9.6” iPad Air, and the new 7.9” iPad mini with Retina display.

The iPad Air represents the next generation of the standard iPad tablet. As you might expect from the name, it’s all about slim profiles. The new tablet is just 7.5 mm thin, a 20% reduction from the current iPad model. Its bezel is 43% smaller too. And the new Apple iPad Air is being touted as the lightest full-sized tablet available – it now weighs just 1.0 pound.

The big improvement to the new iPad mini, meanwhile, is spelled R-E-T-I-N-A. The tablet finally boasts a 2,048 x 1,536 Retina display, giving it the same resolution as the larger iPad but in a smaller package.

Both devices have Apple’s new A7 chip is built in; the Air has the company’s new M7 motion co-processor as well. Both also offer Apple’s iWork suite of software free with purchase, 10-hour battery life, a 5MP iSight camera and FaceTime in full HD. And, of course, both come with iOS 7 pre-loaded.

The new Apple iPad Air will begin shipping November 1. Apple’s 16GB WiFi model has an MSRP of $499; an LTE version is available for $629. The Apple iPad 2 will continue to be offered for $399.

The new iPad mini Retina is coming "later in November" starting at $399. The non-Retina version will be priced at $299.