Amazon Echo Devices Are Becoming Much, Much Smarter

by Suzanne Kantra on September 29, 2021
in News, Music and Video, Health and Home, Speakers, Blog :: 1 comment

Amazon’s line of Alexa-powered Echo smart displays and speakers already make our everyday lives easier. But big upgrades rolling out this fall that bring artificial intelligence and face recognition are set to transform the way your Echo devices interact with you and your home. These are the changes that, in my opinion, will make the biggest difference for most people.

1. Teach Echo Show to recognize you

Face recognition is coming to the Echo Show 8 (2nd Gen), Echo Show 10 (3rd Gen), and the new 15.6-inch  Echo Show 15 (available soon for $249.99). Using their built-in cameras, you can teach them to recognize your face with a new feature called Visual ID. All of the processing that your Echo Show does to identify you is done on your device; nothing is sent to the cloud. Once you enable Visual ID, your Echo Show will display a home screen that’s personalized to you when you approach, such as appointments and reminders, and your music playlists.

2. Use motion detection to start tasks with your Echo device

Alexa Routines lets you automate tasks based on triggers, like the time of day or a voice command. So you could have your smart lights turn on at 5 PM, or saying "Alexa, Good Morning" could turn on your smart coffee maker and have Alexa tell you your first appointment. In June, Amazon rolled out the ability for Echo Show 8 Gen 2 ($129.99) and Echo Show 10 Gen 3 ($249.99) to trigger a routine to start when you enter or exit a room, using their built-in cameras (This will be available for the Echo Show 15 when it launches.). In testing by Cnet, they found that it works but there are some limitations; there is a seven-minute cool-down period between person detection events and there needs to be enough light for the camera to “see” a person.

If you have Echo Gen 4 ($99.99) or Echo Dot Gen 4 ($49.99), the devices will be able to determine occupancy by sending out a soundwave in the ultrasound frequencies (Ultrasound is commonly used in occupancy sensors and is well outside the limits of human hearing. However, frequencies in that range can be heard by some animals. Amazon told me that while "some pets may be able to hear ultrasound waves, it is not harmful to them."). A useful feature if you want to have lights turn on or off based on room occupancy.

Your Echo device can already recognize the sound of breaking glass or smoke and CO detector alarms and send you a notification with the Alexa Guard skill. And soon, you’ll be able to teach Alexa to recognize and alert you to other sounds with Custom Sound Event Detection. Want to know when your toaster oven dings or the garage door opens? You will be able to capture the unique sounds in your home and have your Echo device take specific actions when those events occur.

To deliver more of the information that’s important to you at a glance, Amazon has developed widgets for the home screen of Echo Show devices. You'll be able to select from weather, news, calendar, shopping list, recent photos, and various Alexa Skills to populate your home screen. Widgets will roll out to all Echo Show devices (except Echo Spot). 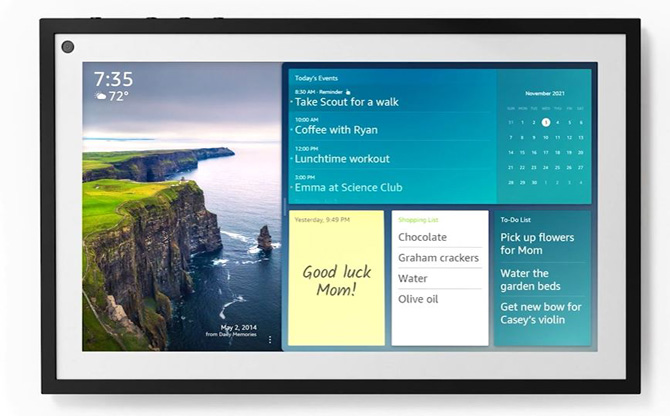 Forget the fridge; Amazon wants you to post sticky notes to your Echo Show. You can post general notes or address them to individual members of your household. If you have Visual ID enabled, personal sticky notes will appear just on their home screen.

Updated 9/29/21 with information on impact of ultrasound waves on pets.

Which features are in the US?

Please include the regions where these features will be available. Ie US, UK?