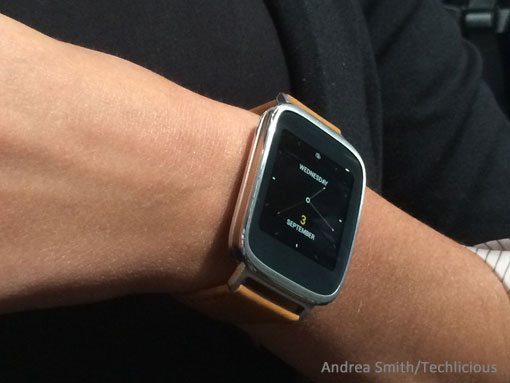 The Asus ZenWatch, a beautifully designed smartwatch with a stainless steel case and leather wristband, has been revealed as the company's first Android wearable. Shown on Wednesday at the IFA tech show in Berlin, the ZenWatch seems to be more of a luxury watch designed to replace your existing watch, much like the Withings smartwatch that was announced in June. There's no plastic feel to this smartwatch (unlike the LG G Watch R); it feels solid without being heavy. The soft leather watchband features detailed stitching and a quick-release clasp. 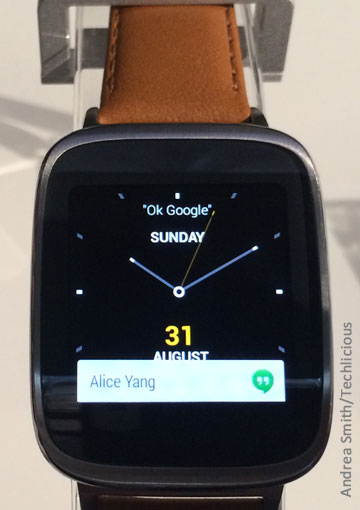 The ZenWatch uses a smartwatch version of the Asus ZenUI running on top of Android Wear, giving it functionality such as a scheduling manager and reminders for incomplete to-do list items. Apps like these help you stay connected without needing to reach for your phone — exactly the kind of apps that make a smartwatch useful.

A handy feature called Watch Unlock lets you unlock your phone by just touching the watch face. Cover to Mute lets you mute a call by placing your hand over the watch.
Of course the watch also tells time, and you can customize the display to show not only the time but also notifications, flight and navigation information, music and camera controls and more. A built-in bio sensor measures your heart rate, tracks steps and offers feedback for healthier lifestyle based on your relaxation levels.

The ZenWatch has a rectangular face with a 1.63-inch, 320 x 320 Amoled touchscreen covered by curved Gorilla Glass 3.

Asus says the watch will go on sale in October 2014 at about $260. No word on battery life, but we expect it to be similar to other recently released smartwatches that run a day or two before needing to be charged.