Like everyone, I am always on the lookout for a more comfortable pair of shoes. So, when Rockport reached out and asked if I wanted to test a pair of shoes with their proprietary Total Motion technology, I agreed to give them a shot.

One of the issues I have always had with Rockport is that their styles were too conservative for me, with a look that conveys comfort far more than fashion. And that is still largely the case. But I was pleased to find a larger selection of shoes to satisfy my inner hip New Yorker than I expected on Rockport’s site. Ultimately, I chose to have Rockport send me a pair of the Total Motion Lite Lace-to-Toe Sneakers in white, which offered a classic, somewhat retro look that would be perfect for summer.

When the shoes arrived, first impressions were that this was a sharp looking pair of sneakers. The leather is a light ivory, with dark ivory rubber soles and tasteful tan leather accents. Similar in design to my favorite Puma Smash v2 sneakers, though a bit more preppy. My style choice in the Rockports was confirmed by my 15-year old son who immediately asked if he could have them. The answer was “no”.

But the real test would be how these shoes feel on the feet. Does the Total Motion technology make these shoes more comfortable than a standard street sneaker, such as my Puma’s or an Adidas Samba? The answer to that is a definite “yes”.

At the core of the Total Motion system is an open-cell foam shock absorption component for the heel that Rockport calls truTECH. I noticed far less impact on my heel during normal walking than I do with the standard Smash or Sambas, yet the Rockports still felt supportive (Puma also sells a version of the Smash v2 with memory foam inserts, though I found those to be mushy and uncomfortable). Despite the additional heel cushioning and a nylon stability shank, the Rockports are also considerably lighter than the Puma Smash, weighing in at 298 grams per shoe versus 410 grams for the Smash.

The footbed is also removable, should you want to replace it with your own inserts or orthotics. 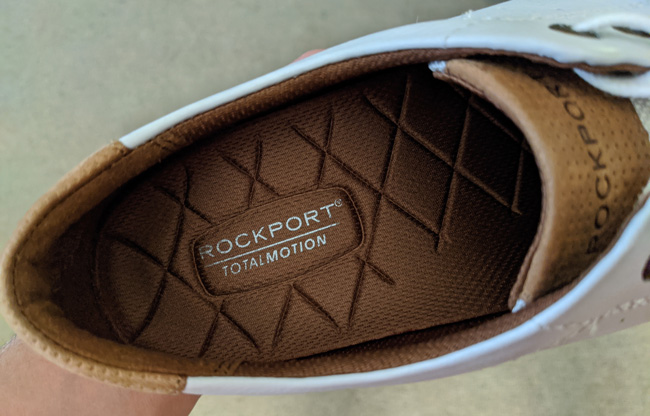 Beyond style and comfort, the Rockports look and feel better made than what you get from the athletic shoe manufacturers, with lining material and stitching that have a tailored appearance. How this will translate into long-term endurance is hard to say. My experience with Pumas and Adidas is that the sole tends to wear out long before the other components, and I don’t expect this to be significantly different for the Rockport's rubber sole.

All the additional Total Motion technology in the Rockports will cost you though. My Total Motion Lite Lace-to-Toe Sneakers retail for $110. That’s a big jump up from the $90 Sambas or the $55 Smash (which you can often grab on sale on Puma.com or Amazon). However, if your feet need that extra support, it may be worth it for you.

In addition to the sneakers I selected, Rockport’s Total Motion technology is available in dozens of different styles and colors, including men’s dress shoes and heels for women.