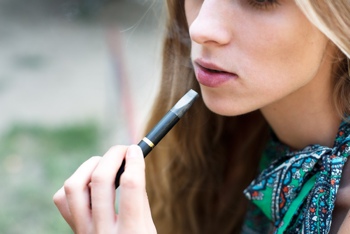 Electronic cigarettes have exploded in popularity over the last few years as a more discrete, healthier alternative to traditional cigarettes. But new research presented this week at the American Association for Cancer Research annual meeting suggests that e-cigs (or vapes as they’re often referred) may carry significant health risks of their own.

In the research study, reported by the journal Nature, a team of doctors collected and isolated a number of bronchial cells from smokers at risk of lung cancer. Doctors exposed one set of cells to e-cig vapor and the other to traditional cigarette smoke. The cells exposed to the vapor showed a similar pattern of gene expression as the cells exposed to the smoke.

The changes to the cells do not necessarily indicate a higher cancer risk on their own, but the data does have researchers concerned. “[E-cigarettes] may be safer [than tobacco], but our preliminary studies suggest that they may not be benign,” says Dr. Avrum Spira, a study researcher based out of the Boston University School of Medicine.

While it’s believed that nicotine vapor itself is a low cancer risk, the American Cancer Society (ACS) notes that it's still a highly addictive drug. Further, electronic cigarette vapor often contains cancer-causing impurities such as diethylene glycol. The ACS does not recommend using e-cigarettes as part of your plan to quit smoking.

“Long-term health effects [of e-cigarettes] are still unclear,” says the ACS. “This is an active area of research, but the safety of these products is still unknown.”

GLAXO and PFIZER make a “nicotine inhaler” that converts liquid nicotine into vapor. Sound familiar??? They make an inhaler that shoots liquid nicotine and six chemicals up your nose. But I guess their nicotine is good nicotine because they pass out millions of dollars to these phoney researchers and corrupt doctors who extol the virtues of anti-depressants. CHANTIX the anti-smmoking pill is “NUMBER ONE ’ in adverse event reporting, violence, hostility etc. to the phony very corrupt FDA. Who is running this smear campaign??? Bloomberg News Service 2/19/2014, ” GLAXO MEMO SHOWS DRUG INDUSTREY LOBBYING ( THE POLITICIANS) on e-cigs”
1/18/18/2007 The Centers for Science and the Public Interest and the Wall Street Journal Expose financial ties between NIH doctors and researchers..

What a joke. This researcher was paid to cover up the benefits of e-cigarettes. I have been using them now for roughly 3 years. Since then, I have stopped smoking regular tobacco cigarettes (for about 19 months now). I am currently able to run about 3 miles/day. I have had my lungs checked and my doctor said they are healing already.

There are no “benefits” of e-cigarette when contrasted with not smoking at all, they simply may not be as harmful as tobacco smoke (or not harmful at all). However, since you’re still regularly inhaling multiple foreign substances into your lungs with e-cigs, it makes sense to study whether or not they are truly safe. If I were in your running shows, I would want to know.

Note that this study was funded by an NIH grants (not industry) and the authors were pretty cautious in their language regarding how much you can infer from these preliminary results.

You are 100% right - you cannot compare inhaling water vapor to not smoking at all. However, just because you inhale water vapor does not mean it is harmful. In fact, it is like walking into a steam room, especially if you choose an e cigarette with 0% nicotine. Even the ones with nicotine - it may be so minimal that no damage is done. Still, it would “technically” be more harmful than not smoking at all. At the end of the day, take a big e cigarette company like Blu. Their products are manufactured in the US (whereas most companies manufacture in China). There is a lot of oversight into what goes into Blu’s products. It is literally just water vapor (and nicotine if you choose the e cigarettes with nicotine in them). Nicotine in it of itself is not necessarily harmful for you (in small doses). The problem is that people tend to smoke a lot which can cause problems. In any event, yes - e cigarettes are more harmful than not smoking at all, at least technically speaking.

That said though, cigarettes are legal. I don’t understand the fuss regarding e cigarettes. They are looking to place more restrictions on e cigarettes than actual tobacco products. That is probably because America was founded on tobacco (economically speaking). The US tobacco industry will unfortunately never die. Only the people they sell to…

This study was specifically about the effects of the nicotine in e-cigs, not e-cigs in general. That’s important because e-cigs are being marketed as a “safe” alternative to smoking, and the research will bear out whether that is true or not.

I also find it a little disingenuous to suggest that somehow the nicotine in e-cigs is not the primary driver for why people buy them. Even on your own site, every article and FAQ is contrasting e-cigs with smoking and tobacco use and safety. Maybe a tiny percentage of people are buying them just to inhale water and flavorings. but that is really not what is at issue here.

That said, I completely agree with your last paragraph.

Well...every article on my site

Well…every article on my site contrasts that because that is what people who search for safety of e cigarettes look for. However, for actual e cig users (not people looking at what e cigs are): Green Smoke released a report (I can’t find it but I did see it…I will try and find it for you) that says that the main reason why people buy e cigs isn’t for nicotine. it’s to stop smoking real cigarettes. That doesn’t mean it’s for nicotine though. They want to stop smoking altogether. People believe that by smoking e cigs they will stop smoking period. In fact, many people who switch from regular cigarettes to e cigs purchase 0% nicotine after a few weeks because, after all, smoking is heavily psychological.

Again, I don’t think there is absolutely no harm involved in e cigs with nicotine in them. Nicotine is a substance and an addictive one at that. Also, anything other than air is likely worse for your lungs that regular air. But, everything in life kills you…I will be interested when real FINAL results are published about the safety (or dangers) of e cigs. I will be surprised if the report comes out and says they are dangerous.

The discussions about e-cigarette are

The discussions about e-cigarette are likely to continue for a long time until finally there is a long-term study.

This news is really scary because I literally chain vape, all day nonstop. There really needs to be more effort in testing and studying the effect of e cigs.

It’s sad that there are so many propaganda from both sides.. Huge tobacco companies sponsor “real” studies to get rid of e-cigs.. Biggest e-cigarette companies say that E-Cigs are not harmful.. Only thing I know that I was able to quit smoking using an e-cigarette and after that it was way easier to give up vaping than smoking.. I simply decreased my nicotine strength for cartridges till I reached 0% nicotine strength. I hope that you guys are having similar success with e-cigs.

The discussions about e-cigarette are likely to continue for a long time until finally there is a long-term study. I will be surprised if the report comes out and says they are dangerous.

Conversions in Germany suck and there are no strong partners.

It really need long term studies to do more research on that subject. According to the German Cancer Research Centre, e cigarettes are less harmful, because there is no side product produced (f.e. tar).

According to the German Cancer Research Centre, e-cigarettes are healthier than regular tobacco cigarettes. E-cigarettes do not produce toxic side products like f.e. tar.