Escort Max 360 Looks to Take Out Valentine One 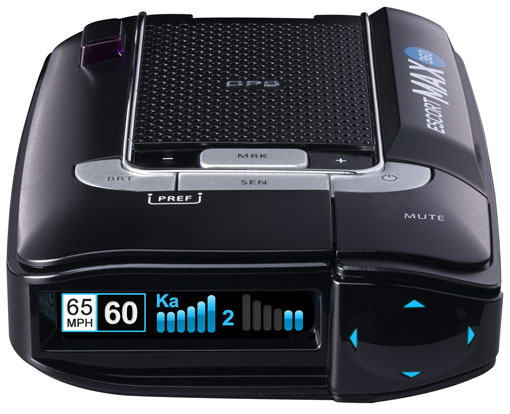 Escort announced its newest radar detector yesterday, the Escort Max 360, with a quad-directional arrow display that shows where radar threats are coming from. While the Escort Max series has always offered top-notch detection performance, its prime competitor in the high-end detector market, Valentine, has won many fans for the Valentine One with its directional threat arrows. In fact, the Valentine One was our top pick in radar detectors back in 2013. The Escort Max 360 aims to beat Valentine at its own game.

The new Max 360 uses dual-antennas that can detect multiple threats simultaneously, then shows the driver where the threat is coming from—front, rear or side—helping the driver make a better determination of how to respond. This functionality is very similar to the Valentine One. However, the Max 360 goes a step further by also color-coding the arrows to represent the frequency of the source—blue for “X Band,” yellow for “K Band” and red for “Ka Band”—so you can see that you might be getting a false K alarm from an automatic door opener to the side, but getting a likely police Ka band signal from the front.

The Escort Max 360 also incorporates the same digital signal processing (DSP) and GPS-based technology in earlier Max models that help it further eliminate false alarms (a constant complaint with the Valentine One, as well as many less expensive radar detectors from Cobra, Whistler and others). The DSP is most useful for screening out the collision avoidance systems becoming popular in many car models. Audis, in particular, are known for emitting K-band radar that will set off many detectors. In my testing, the Escort Passport Max with DSP is far more effective at screening these out than my Whistler CR85, without DSP. At the same time, the Max 360's built-in GPS receiver enables you to permanently block out known false alert areas, such as toll booths and shopping malls with many automatic door openers.

The Max 360 offers red light camera alerts, as well, and is compatible with the Escort Live! app, which gathers alerts from other Escort drivers to provide even greater warning of upcoming threats. The internal red light camera database and other functionality updates can be uploaded using a built-in USB port.

Escort is confident enough in the Max 360's performance that it is offering a "ticket protection guarantee". They will pay up to $250 for any speeding ticket you receive based on a radar or laser reading while using the device. Some restrictions apply, naturally.

One area where earlier Max models missed the boat is with the windshield mount. The poorly designed mount allowed the detector to bounce around and, eventually, slip off. In some cases, the bouncing put enough stress on the case that the case would actually separate entirely. My Passport Max review unit from a couple of years ago experienced that issue and the problem is discussed widely in Escort forums. Escort is aware of the design fault and the Max 360 uses a new magnetic mounting system that I've been told eliminates the issue.

The Max 360 is priced at a lofty $649.95 and will be shipping the week of October 19th. For those who require the absolute best performance, though, the Max 360 is almost certainly the way to go.

For those looking for a less expensive alternative, Escort's sister company, Cobra, recently released its first DSP-based radar detector, the DSP 9200 BT, for $399.95. It doesn't have the arrow alerts and I haven't done enough testing to determine whether it performs up to the same standards as my Escort Passport Max, though my initial results have shown fewer false alerts than our top radar detector pick under $200, the Whistler CR85, and very good performance.

Max360 vs Valentine One

Great review on the Max360, we also have done a comparison of both detectors here: https://www.radarbusters.com/Passport-Max-360-Valentine-One-s/2638.htm

Always appreciate your comments. Any plans to do a road test with the Max 360 vs Valentine One? Would be interested to see how they compare with directional indicator accuracy.

Has there been any discussion regarding the laser performance on the Max (version 1) and potential improvements on Max 2 or 360? I have been a long-time V1 user, and I really miss the laser detecting capability of that unit since I bought a Max. The V1 had the amazing capability of detecting laser as the officer tagged cars in front of you on a busy road… so for the most part, if he had the gun up to his eye, I expected to get an alert from my V1 whether he was aiming at me or not. I became used to it. The Max, unfortunately, doesn’t give any indication of laser until it’s obvious that I am the next target. I’ve usually already spotted him and slowed a bit, but it’s frustrating because I know my trusty V1 would have alerted me already.

That was your first mistake.....

Max360 not ready for prime-time

Escort has admitted the problem with the arrows being very slow, and is working on it, but no firmware available yet that fixes it.  Range is also not up to par with V1.  Could be a great product in a year or two, but it’s not ready yet.

I have the new MAX 360 and compared to their Max, the 360 currently as of first Nov shipment this is a bad unit, waste of $$$. It falses all the time and I have even found myself driving past Radar/speed cameras before it even goes off. My Max always notifies me way in advance but the 360 went off only as I drove through the intersection. NO sound, just a picture of a light signal. I Called Escort and they know they have many other complaints. I use my IX and MAX but the MAX 360 is not of the same quality and I believe with Escort’s new deal, they will be paying for many tickets. The power cord has a blue light that is bothersome during the day and blinding at night! When you have an alert a Yellow light goes on and it’s even brighter than the Blue on light, which lights up your car it’s so bright. Why they changed from the Green when On and Red for Alerts is beyond me. They also don’t have software for upgrades for Mac OS. Seems kind of simple minded to sell the MAX 360 before you provide the software necessary to fix their bugs with an upgrade. In my opinion Escort obviously should not have released this unit until the bugs were worked out. I returned my unit as they don’t have a Mac OS to run an upgrade to see if VS 1.2 would even help. Don’t know if the management has changed at Escort but this new 360 isn’t anywhere near the quality they have made in the past! I know, I go back to when Escort first sold detectors. I think they may have rushed this MAX 360 out to make the Christmas rush before it was ready.

With the filters off Ka range as good as my Escort Redline and K band not as good and prone to more k band false with TSR off. Escort Max 360 at least for me detects Ka sooner then Valentine One and not as good on K band, even so it’s still offers ample warning time.