With more people using mobile devices to stream movies, the download speed of your mobile carrier is becoming increasingly important. Fortunately, according to a study of over 14 million cellular network mobile test results just released by Ookla, mobile internet speeds have risen by 19% over the past 12 months to an average of 22.69 Mbps; with all four major carriers—AT&T, Sprint, T-Mobile and Verizon—providing typical download speeds high enough even for 4K movie streaming (though you'll burn through your data plan in no time). 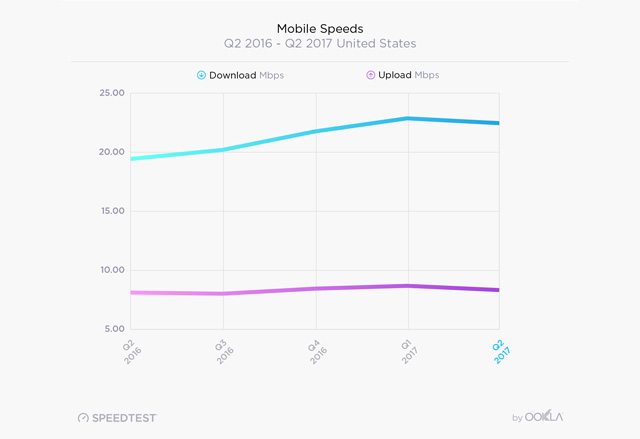 But all things are not equal amongst the carriers, or across cities—here's who came out on top.

T-Mobile took the crown for the highest average Ookla Speed Score nation-wide (Speed Score is based on a combination of low-end, median and top-end performance for both download and upload speeds). While Sprint came in last of the four carriers, it still provided average speeds that should be more than acceptable for most uses. 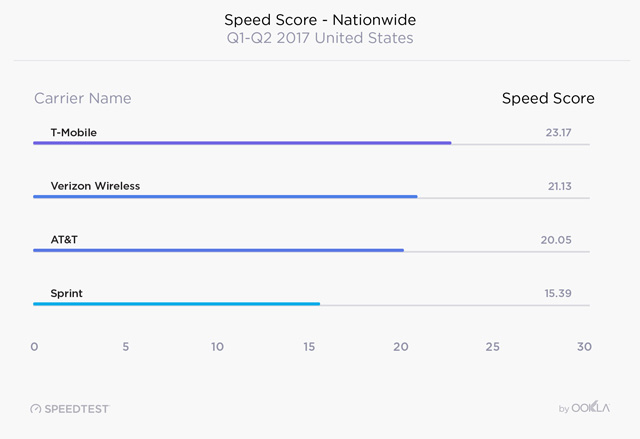 Verizon catches up somewhat when looking only at the 100 most populated Cellular Market Areas (CMAs). Customers in rural areas are more difficult to serve and saw average download speeds about 21% slower than the nation, as a whole, and Verizon provided the majority (51%) of the rural samples used for the comparison, says Ookla. 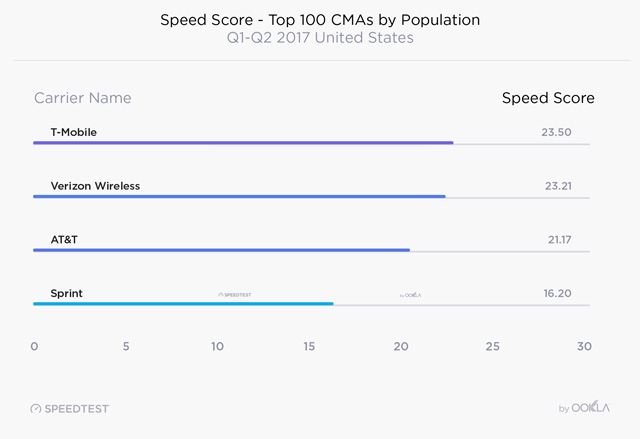 Which Carriers provide the most reliable internet speeds?

Taking another cut at the data, Ookla looked at the percentage of each carrier’s test results where they were able to provide an “acceptable download speed” of 5 Mbps or greater—fast enough for streaming Full HD video. T-Mobile again took first place, with 78.1% of the tests exceeding the threshold. Verizon was just behind at 77.8%, AT&T delivered 75.9% and Sprint was back in last place with only 64.9% of tests achieving 5 Mbps or faster.

While knowing which carrier is fastest nation-wide is helpful, most of us care about who is fastest where we spend the vast majority of our time—in our home city. T-Mobile was the fastest carrier in 40 of the 100 most populous urban areas, based on Speed Score, while Sprint only took the honors in five. 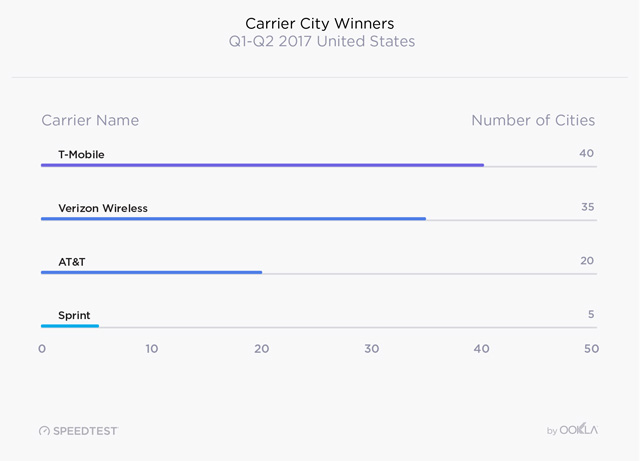 Here is the detailed breakdown of all 100 cities so you can who has the fastest mobile data in your area, and how your city stacks up against others around the country.

(City speeds based on average speeds for all test results. Fastest Carrier based on Speed Score. Data via Ookla.)

The good news in this study is that most consumers, in most places, now experience mobile data speeds that are fast enough to easily accommodate their daily usage, including streaming of HD video. So when considering a mobile provider, coverage and plan features (including data allowances and cost) should be of more importance in your decision than internet speed. But there are gaps in coverage (as Sprint’s 65% acceptable speed ratio score clearly shows). Look to the speed winner in your city above as a good indicator of who has the best coverage in your area.

[Charts and data via Ookla, image of woman using phone via Shutterstock]