Lenovo's Yoga line has always been closely bound up with the idea of exciting innovation and cool features. After all, that first laptop/tablet hybrid got everyone's attention with the 360 degree hinge and since then the design and features have just gotten better. When the company introduced the Yoga tablet line last year it didn't have quite the same level of innovation—though the kickstand integration definitely gets a checkmark for cool. That's about to change with generation two.

The 13-inch Yoga Tablet 2 Pro ($499) is a media machine through and through. Design-wise, it's similar to the other Yoga tablets: slim and lightweight with a cylindrical base where you'll find the battery, the hinge for the stand, and, on this model, a small projector.

There have been attempts to bring Android to larger screens in the past that have had some success. And the 13-inch size makes the Yoga Tablet 2 Pro large enough to serve as a portable TV and movie-watching machine. The display is beautiful and wide viewing angles and a QHD resolution of 2560 x 1440; you can watch full HD content without losing a pixel. When I tested out the audio the tablet pumped decently well-rounded sound thanks to the loud front-facing speakers and the small sub-woofer on the rear. 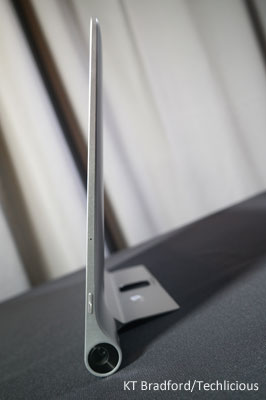 All of that is impressive but not completely out of line with what we've seen before. The interesting bit is the pico projector housed in the cylindrical hinge. It's capable of projecting on screens up to 50 feet at 40-50 lumens--the room doesn't need to be totally dark to use it, but that will help the image look clearer. The projector is only capable of an 864 x 480 pixel resolution, so you won't get HD quality. Still, the image looks great projected on the wall and the lower resolution is hardly notable. The pro will project anything on the screen, from the Android interface to games to websites to video.

The projector is part of where the Pro aspect of the name comes from. This Yoga would make a handy presentation companion for small rooms and large ones--just use the screen when folks are close and the projector when there are more people in a bigger room. You can have a lot of fun with it at home as well for parties, family movie night, or group gaming. The stand is all you need to prop the tablet in the right position in most situations. Check it out in action below.

Lenovo updated the stand design on all the Yoga Tablet 2s so that the hinge now rotates 180 degrees, giving you more available angles for sitting it upright or tilted just so for typing. When rotated out completely it can also serve as an easy mounting solution. Each tablet has a nook in the stand so you can hang it on the wall using a nail or 3M hook--whatever will hold. That makes it a little easier to bring into the kitchen--you can hang them on a cabinet to keep them away from errant splashes.

With an Intel Atom processor inside, 2GB of RAM, 32GB of internal storage, and a microSD slot that takes up to 64GB cards, the Yoga Tablet 2 Pro has great potential as a family hub, secondary TV/movie watching device, and easily ported entertainment center.

Lenovo's new 8 and 10-inch Android Yoga Tablet 2s ($249 and $299, respectively) have updated specs from last year--1920 x 1200 resolution screens, Intel Atom CPU, 2GB of RAM, 8MP rear camera with auto-focus, 18 hours of battery life--but are mostly unchanged on the outside and selling for the same price. The general design is the same with the exception of the hinge updates, and that's for the good. Except for the side with the hinge these tablets are quite thin and overall the weight is appropriate for the size. Screens look great from almost any angle and the audio is above average for tablets.

The real excitement is that now you can get these tablets with Windows 8.1 as well. The design is identical except for the color (slate black instead of silver), the specs are the same except twice as much internal storage (32GB). Both the 8 and 10-inch versions ($299 and $399, respectively) ship with a free year of Microsoft Office 365. To add to the productivity chops, Lenovo also created a keyboard cover for the 10-inch Windows model that connects via Bluetooth.

Since Windows tablets are more likely to be used for getting work done, the Yoga hinge modes are an even better fit on these. Lenovo has had some success with Windows on smaller slates, and in my short hands-on time these performed smoothly and overall looked really good.

All of the next generation Yoga Tablet 2 devices are solidly designed and well-priced for what you get. Hopefully the experience of using them matches my first impressions. If so, any of them would make good holiday gifts.