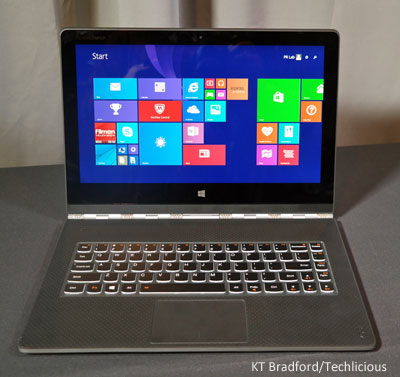 Two years ago, when Lenovo first debuted the IdeaPad Yoga 13 it was one of the most exciting 2-in-1 hybrids to herald the coming of Windows 8. Though the operating system still has people cringing, the hardware remains innovative and useful and has improved with each generation.

No surprise then that the two new Yogas, the Yoga 3 Pro and the ThinkPad Yoga 14, are pretty impressive. With the Yoga 3 Pro, Lenovo redesigned and improved upon the hinge mechanism. The ThinkPad takes a cue from the Carbon X1 design, fitting a 14-inch screen into a 13-inch body and adds discrete graphics to boot. 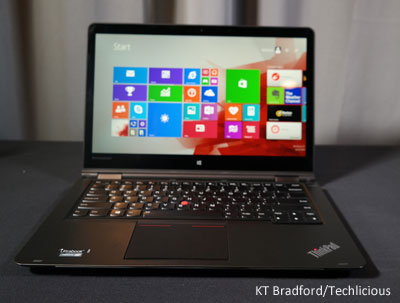 When most people think of ThinkPads they envision boxy business machines that embody durability but don't always have the most eye-catching designs. Over the past few years Lenovo has worked to change that perception, and laptops like the Yoga 14 are the result. You'll still get the durability features such as a magnesium alloy frame, and of course that great ThinkPad keyboard. However, the design is slim, sleek, and attractive. At 4.1 pounds it's not feather-light, but is still light enough for ultra portability.

Another reason to take a look at this model over the Yoga 3 Pro is that the ThinkPad has the Lift and Lock keyboard. As you bend it around past 180 degrees, the keyboard not only shuts off, but the deck of the laptop rises up so the keys are flush with it. This helps to keep the keys from popping off when you're in tablet mode.

On top of that, this is a very powerful machine for being so thin and light: 4th generation Intel Core i5 CPU, 8GB of RAM, NVIDIA Geforce 840M graphics, and a 1TB hard drive with a 16GB SSD cache for speedier wake and overall performance of the operating system.

The 14-inch touchscreen has a full HD 1920 x 1080 resolution and is bright, colorful, yet not too reflective or prone to glare. Wide viewing angles mean you aren't confined to one sweet spot for viewing images and video--important for a multi-mode 2-in-1. In my hands-on time I noted how responsive it is to touch and that there's not too much bounce in the hinge. The keyboard isn't as deep as some ThinkPads but felt great to type on. The large touchpad is also very responsive and didn't make me feel like I would always need to reach up and touch the screen.

If you need powerful performance as much as you need versatility, this ThinkPad may be the Yoga for you. And at $1,199 the price isn't bad, either.

However, the 4.1 pound weight is a little above the ultrabook weights many people are used to. The Yoga 3 Pro ($1,349) is only 2.62 pounds and half an inch thick. That's not even the best part of the new design.

In order to make the laptop thinner, Lenovo redesigned the hinge from the ground up. The inspiration came from watchbands, and it features six points of articulation. Once you put it at an angle, the hinge stays. Yet it's also just as easy to move the screen and keyboard deck as before. Check out our hands on below:

The Yoga 3 Pro doesn't have the Lift and Lock mechanism that the Thinkpad does, so exposed keys are still a bit of a problem. Other than that, the design looks and feels really good. With convertibles, the large screen size can make using it as a tablet a little unwieldy. That's less of an issue when the entire machine is this thin and light.

Inside, an Intel Core M-70 processor (made for ultrathin systems) runs the show backed by 8GB of RAM, a 256GB SSD, and integrated graphics to support the 3200 x 1800 resolution touchscreen. This model comes with two USB 3.0 ports and an extra USB 2.0 port that also doubles as the power port. A clever way to include an extra USB without adding bulk.

Both of the new Yoga 2-in-1 laptops have several things to recommend them, so it mostly comes down to a choice between more power and durability or lighter weight and higher resolution display. Either way, both models will be available by the end of October.

The Yoga 3 is so sweet, I can’t wait to get my hands on one.

I’d get the Yoga 3 Pro from the Lenovo website, but that’s just because they always have the best prices.