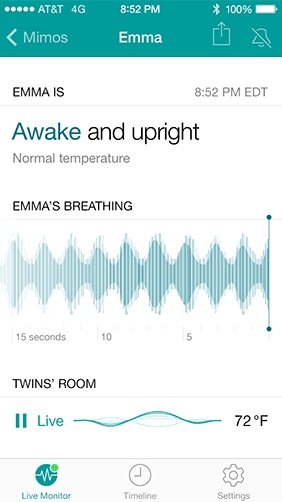 Every year in the United States, approximately 4,000 otherwise healthy babies die from Sudden Infant Death Syndrome, or SIDS. These deaths typically occur while the baby is sleeping, and parents often don’t know anything is wrong until it’s too late.

We still don’t know a lot about the specific causes of SIDS, but there’s hope that new monitoring technology can help parents better combat it. Enter the new Mimo baby monitoring onesie from Rest Devices, a high-tech activity tracker for baby that keeps constant tabs on breathing, movement, positioning, temperature and more.

There are three main components to the Mimo system: The kimono onesie, an attachable low-energy Bluetooth Turtle, and a Lilypad WiFi base station and charger. All three connect: The kimono’s non-contact machine washable sensors help monitor your baby’s vitals, the chew-safe Turtle sends the information wirelessly to the nearby Lilypad, and the WiFi Lilypad beams the info to your iPhone or Android device. The Lilypad also has a mic, so all your baby’s sounds can be streamed as well.

Stomach sleeping is a major SIDS risk factor, so Mimo tracks and alerts you any time baby rolls around on his or her stomach. You can also monitor breathing, whether baby is awake, and room and skin temperature. This can be done in real-time, of course, or you can choose to view long-term graphs of your baby’s activities.

There are a lot of similarities between the $199 Mimo system (3 onesies, a Turtle, and a Lilypad) and the $250 Owlet activity-monitoring bracelet Techlicious covered back in September. One cool bonus feature of the Mimo, however: The Lilypad has a built-in mic, so not only is Mimo a vitals monitor, it doubles as a standard baby monitor as well.