For those woefully ignorant to matters of next-generation wireless network protocol (that is, me), it’s time to get up to speed on Bluetooth 4.0. While 4.0 maintains the same features as classic Bluetooth -- short-range, wireless radio frequency so devices such as headsets, printers, music players and smartphones can "talk to each other" -- it adds some very cool additional functionality, I discovered.

Bluetooth 4.0 is sometimes called “Bluetooth low energy,” because a small device can go for months on a single charge, or over a year on a coin-sized battery. Imagine a keyboard, remote control or headset that only needs a single, annual recharge? And Bluetooth 4.0 products can still sync with non-4.0 devices. For example, you can use a classic Bluetooth headset with a Bluetooth 4.0 smartphone. Bluetooth 4.0 will also allow for a longer range; Classic Bluetooth reaches about 50 feet meters, 4.0 can send data up to 200 feet, and at a faster rate, making the transfer of music and video more reliable.

So far, Motorola Droid Razr and Apple iPhone 4S are the only phones yet to use Bluetooth 4.0. But more devices are coming. Here are a few hitting stores with many, many more on the way. 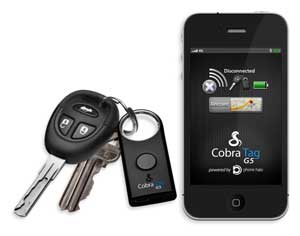 This handy device only needs two charges per year. It helps you track your misplaced keys by using your phone (and vice versa). If phone and keys are ever separated, the keychain Tag and phone both make and audible chime. Users can also just press a button on either the Tag or in the app to manually set off the chime. The Cobra Tag app also marks the GPS coordinates where the devices separated and can automatically send that location via e-mail and social networks, so you’ll know exactly where the phone or keys were left behind. The new Cobra Tag G5 will retail for the same MSRP of $59.95 when it becomes available nationwide in Q2 2012. (see our video below from 2012 CES of the Cobra Tag G5). 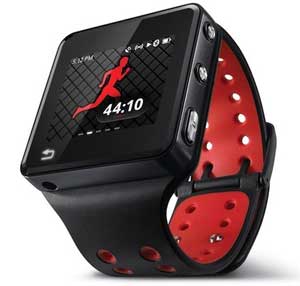 This fitness helper monitors heart rate, keeps running, walking and cycling statistics, and has GPS to track your exercise routes. What’s more, it’s sweat and waterproof and can hold up to 4,000 songs. It offers FM radio and audio "coaching,” (audio updates on how far you’ve gone). The Bluetooth 4.0 part? It syncs with Droid phones such as the Motorola RAZR. The Motoactv will set beat-bumping runners back $249 for 8GB and 16GB or $299.

This device links with iPhone 4S and other Bluetooth Smart Ready (a variation of 4.0) devices, providing users with real-time heart rate readings on their smartphone. With Wahoo’s Blue HR (heart rate) and the fitness app of your choice, you now have your heart rate data, music playlists, phone, GPS maps and more, all in one place. One feature of note is that Blue HR is compatible with many existing fitness apps such as MapMyFitness, RunKeeper, 321Run, Runmeter, and MotionX – with more to come. It’ll set you back $79.99. Check Wahoo Fitness for details.