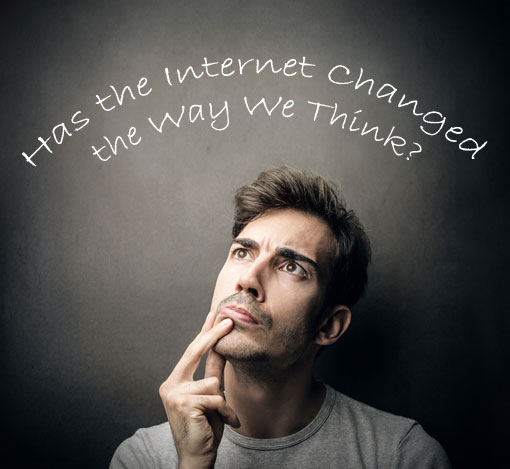 The Internet has provided us with quick and easy access to information for decades now, but has this convenience affected the way we think? New research suggests that people who have access to the Internet are less willing to trust what they know and less willing to say they know something about the answer to a question.

A study led by University of Waterloo psychology professor Evan F. Risko looked into how Internet access sways human thinking patterns, particularly in “metacognitive processes that govern our decisions about what we ‘know’ and ‘don’t know.’"

The study quizzed 100 participants about general knowledge questions such as “What is the capital of France?” Participants were instructed to specify whether they knew the answer or not. Half of them were given Internet access and told to search for the correct answer online if they did not know the answer themselves. The other half did not have online access.

Results indicated that Internet access affected participant willingness to give answers, resulting in fewer correct answers to the questions but increasing answer accuracy when one was provided.

Professor Risko, who also holds the Canada Research Chair position for embodied and embedded cognition, said that the pervasive presence of the Internet affords us instant access to a humongous amount of data and information, but that very same access to data seems to cause people to “less likely rely on their own knowledge.”

Study results also led the research team to speculate that Internet access might make people find it somewhat unacceptable to say they know the answer to a question if that answer turns out to be incorrect. Further, the team thought that participants with Internet access gave up on questions more easily, saying they didn’t know the answers, because Google and other search engines could easily help them satisfy their curiosity and finding the answers can be rewarding.

Risko plans to take his research further by studying why individuals with Internet access become less willing to provide an answer to a question.

[Image credit: Man being doubtful about something via Shutterstock]