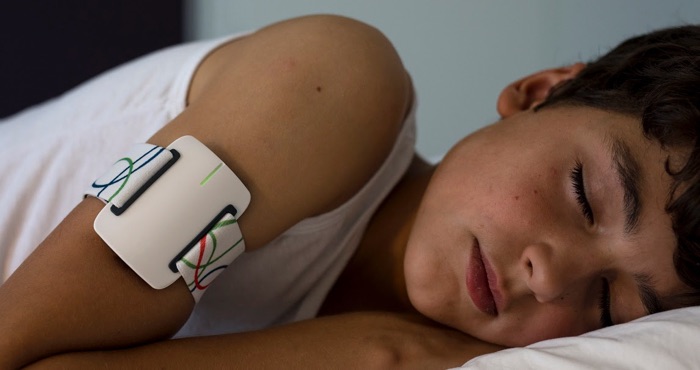 It’s estimated that more than 3,000 people in the U.S. with epilepsy die from Sudden Unexpected Death in Epilepsy (SUDEP) each year, making it the most common reason for death among epileptics. Shown at CES 2020, a new wearable monitoring device called NightWatch has the potential to change that.

NightWatch is a unique artificial intelligence wearable medical device that can detect 9 out of 10 types of seizures that could possibly cause SUPED during sleep. The device contains a photoplethysmographic heart rate module and a 3-dimensional accelerometer. When the system suspects a major epileptic seizure, a warning is transmitted wirelessly to the armband’s base station to alert the caregiver.

Epileptics wear this easy-to-use device on their upper arm with direct skin contact while they sleep. The arm is a better spot than the wrist because the upper arm moves less, creating fewer false alarms that the wrist would. I stress this point because my son wore the 1st generation Empatica and the warning went off all the time. After a few weeks, I couldn’t take the constant stress and he stopped wearing it.

When a seizure occurs, the base sounds an alarm with lights and sounds. The sound will depend on what problem is being detected. The alarms can be forwarded to cell phones and call systems as well. I often cannot sleep because I am so worried about my son, but he is too old for me to make him sleep with me. This device could provide better sleep for caregivers since they know they will be alerted promptly.

The NightWatch can be connected to the internet so that you can obtain a readout of the wearer’s heart rate and motion data. The online portal provides insight into how the night went and helps you better understand why the NightWatch sent notifications, eliminating any uncertainty about what happened during the night. In addition, it provides you and your neurologist with a greater insight into the intensity and duration of your seizures.

Fully charged NightWatch works for a minimum of 10 hours and can work up to 16 hours. A warning sound is emitted if the battery is running low (4 beeps every 2 seconds).

NightWatch is currently available in European countries that accept CE certified medical devices, and is expected to receive clearance for sale in the U.S. later this year.

What age is appropriate for this monitor?

The NightWatch is appropriate for

The NightWatch is appropriate for children ages 2 and older, according to the company.

Hello, I wanted to know if it can be purchased in the USA. If it can be sold in US, what’s the address? What is the price? Do you accept HSA?

As mentioned in the article, NightWatch is currently available in European countries that accept CE certified medical devices, and is expected to receive clearance for sale in the U.S. later this year. We don’t have information for potential pricing when it comes to the US.

Are there procedures in place to alert families when the product will be available in the US? We currently have three cameras on my daughter at night to monitor seizures. She has stopped breathing multiple times during the night. No one gets much sleep around here. This device sounds like it could be a tremendous help.

I have contacted NightWatch and

I have contacted NightWatch and asked for an update on availability and pricing in the U.S., and we will update this story when the device becomes available in the U.S.

NightWatch says they don't have

NightWatch says they don’t have timing for U.S. availability yet.

Price and availability in England

My nephew was just diagnosed with nocturnal epilepsy and my sister has not slept in the last week monitoring him all night. We currently live in Egypt but we have friends who live in England who can send it to us. Can we purchase this device in England and how much does it cost? Is it effective in d in etecting nocturnal seizures? Thanks

Nightwatch availability in us