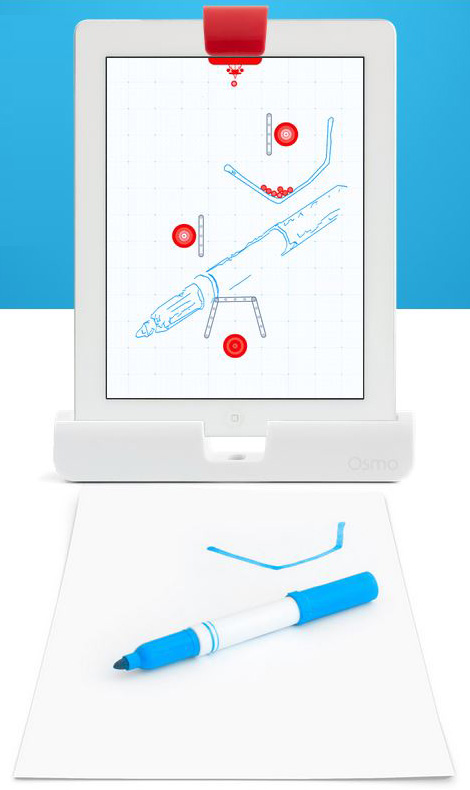 Osmo with the Newton app

The iPad is a great educational tool that children as young as six months old find easy to use. But as great as tablet play is, young brains still need tactile stimulation in the learning process. That doesn't mean the iPad can't be involved. At Toy Fair we took note of a growing trend of toys that blend physical and digital play. One of those toys is the Osmo, an iPad add-on that caught my attention in part because it's so simple and yet has a lot of potential. In February, Osmo was still in development. Now it's ready for playtime.

Osmo consists of just two physical parts, a stand that fits the iPad 2and newer plus both iPad Minis, and the Osmo Reflector which sits over the front-facing camera. The reflector is just a mirror which allows the iPad to "see" the flat surface in front of it. The educational app games do the rest.

At launch, the Osmo works with three games developed in house: Tangram, Newton, and Words. Each of them interacts physical objects like shapes, letter tiles, or plain paper placed in front of the iPad. In Tangram, kids must arrange the puzzle pieces to form the shapes they see on screen. Words is a two-player game similar to Hangman where kids race to spell words based on pictures. Whoever spells correctly first get the points.

Newton is my favorite of the apps. It requires only a piece of paper to draw on. The app picks up the outline of anything within the camera's field of view, such as drawings, physical objects, or hands. On screen, balls fall from the sky and the goal is to aim them at targets by drawing surfaces for them to bounce off. This one is good for solo play or up to three or four kids at once. 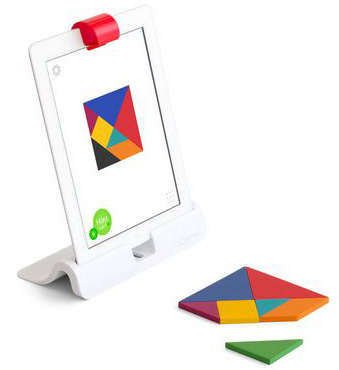 All of the games are designed for kids as young as 6. They're fun and challenging enough that parents will enjoy getting involved, too. And since the apps can easily get regular updates, you may never run out of new puzzles and words to learn.

These are just the first three games. The folks behind Osmo plan to develop more and potentially open the platform to third-party game makers. As I said, there's a lot of potential here for new games and even some existing ones. Before that can happen, Osmo needs a little crowdfunding help.

Instead of doing a Kickstarter or IndieGoGo campaign, Osmo is taking pre-orders directly on the website with a ship date of "late Summer 2014." Because the campaign isn't on one of the normal crowdfunding sites it's hard to know how many pre-orders the people behind Osmo need to meet their production goals. It looks like everyone who pre-orders will get a unit regardless of how successful (or not) the campaign is because cards are charged immediately and not down the line.

The Osmo comes with everything you need to play all three games: the base, reflector, wooden Tangram shapes, and Words tiles. All three apps are free on the App Store. The kit costs $99, but if you pre-order by June 22nd you'll get half off: $49 plus $8 shipping. From my short demo of the Osmo, $49 is more than reasonable. The games are pretty addictive and actually educational, a combo not everyone can pull off. Plus, it's a way for kids to play with the iPad that is less likely to result in accidental scratches. Go to PlayOsmo.com for full details.