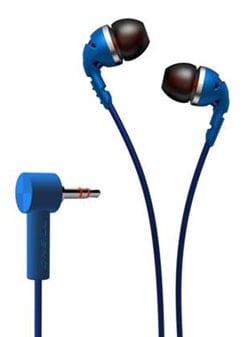 Philips has partnered with O'Neill to create an extra-rugged pair of headphones called The Tread. Intended for outdoor sports (or anywhere else you may want to listen to music while taking a beating), The Tread earbuds are made from steel and can withstand an impact of up to 300 pounds. In addition to the steel construction, the cables are reinforced with Kevlar.

I gave these babies a test by stomping on them a half dozen times and wasn't able to make a dent.

Philips expects The Tread headphones to be available in April, 2012.

These are expected to hit the market in April and then should be widely available.

Indestructible?
I broke mine in six months!
No physical damage I could see, but the sound stopped coming, and I’m assuming I tugged hard enough that a wire inside pulled away.
Still, I hardly exposed them to extreme elements—I’m a student, not an adventurer—and I was definitely not actively trying to break them.

It was just a disappointment, because headphones never last me more than five or six months.