Roku Products Get a Voice Assistant 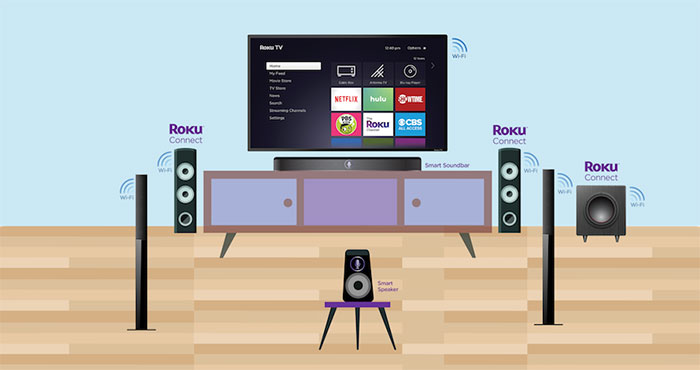 Roku announced that it will launch its own voice assistant entertainment controller for Roku-enabled products. In the same way that Roku has been available for manufacturers to design a Roku TV, the company also announced that it is expanding its licensing to include Roku-enabled Smart Soundbars and Smart Speakers. It will soon be possible to have a full Roku home theater and whole home sound system that is run by a single Roku remote or by the Roku Entertainment Assistant voice control.

Roku has long been the easiest-to-use streaming player and brought that simple menu to Roku TVs. Adding voice command and a single remote to control both TVs and audio promises a whole home entertainment system that is easy for everyone, especially those who struggle with technology.

It all begins with a Roku media streamer or Roku TV. With the Roku Connect software, users can add a soundbar for home theater and smart speakers for whole home audio options.

Third-party Roku-enabled Smart Soundbars are expected to make home theater sound more accessible to even those users who would otherwise not venture into connecting speakers to their TV. Using voice commands and a single remote control, the Roku Connect software will make adding audio simple. Beyond the home theater, Roku Connect should make it equally easy to wirelessly add Smart Speakers in different rooms for a whole home audio experience. Roku Connect will roll out as a software to existing customers this fall.

The Roku Entertainment Assistant voice control will expand Roku's current voice command capabilities to include requesting and playing a movie title and controlling the Roku streaming device or Roku TV. Unlike Amazon Alexa or the Google Assistant, Roku's assistant will only control entertainment. It will be available via a Roku TV or streaming player remote or on Roku's excellent remote app on smartphones. While you won't be able to order a pizza or add items to a shopping list, you will be able to say, "Hey Roku, play the Rolling Stones in the living room," and a Roku-enabled Smart Soundbar will instantly play classic rock songs even if the TV is turned off. The Roku Entertainment Voice Assistant will be available to existing customers as a software update this fall.

Voice control is made possible through Roku Connect software that is available to streaming app developers for free. It's likely that future updates to popular video and music streaming services will include Roku Connect so users can directly access and play titles on Roku devices.

To date, Roku TV is licensed to Hisense, Hitachi, RCA, Sharp, TCL, Element and Insignia. Funai Electric announced that it will be releasing a Magnavox Roku TV in the spring of 2018 along with the previously announced Philips brand Roku TV.

TCL will have more Roku Connect device announcements, but we'll have to wait until the company's press conference at CES on January 8th to learn more about what will be available and when.

When, Where, From Who, and How much?