Hands on with the Samsung Galaxy S9 and S9+

Like the Galaxy 5.8-inch S8 and 6.2-inch S8+, the Galaxy the S9 and S9+ are visually stunning. They share the same displays, but Samsung was able to reduce the bezel at the top and bottom, making them a little shorter and enhancing the sense that the front is all display.

The S9 measures 147.7 x 68.7 x 8.5 mm, while the S9+ measures 158.1 x 73.8 x 8.5. That makes the S9 slightly shorter, wider and thicker than the Galaxy S8. The additional thickness is due to the fact that Samsung is using a new aluminum alloy and thicker glass on the front, which Samsung says will make the S9 models more rugged than the S8 models.

These phones are sleek. A volume rocker and a button dedicated to Samsung's voice-based Bixby assistant are on the left of the device, and the power button is on the right. There's also a fingerprint reader on the back and a slot that holds both the SIM and a microSD card.

Both phones are water-resistant with an IP68 rating, meaning they can easily withstand a dunk in the sink and be washed off if they get dirty.

The phones will come in Midnight Black, Coral Blue and Lilac Purple for the U.S. market.

The big news for the Galaxy S9 and S9+ is their new Dual Aperture cameras with onboard processors and memory. The Dual Aperture means that the lens opening physically opens wider when there less light, enabling you to capture more detail and color in low light situations. The cameras automatically range from f1/5 - f/2.4, or you can manually adjust the aperture. The S9 has a single-lens 12MP camera with optical image stabilization and an 8MP f/1.7 front camera. The S9+ gets a dual 12MP cameras with dual optical image stabilization. The wide-angle camera has the f/1.5-2.4 dual aperture and the telephoto camera is a fixed f/2.4. The S9+ has an 8MP f/1.7 front camera, like the S9. 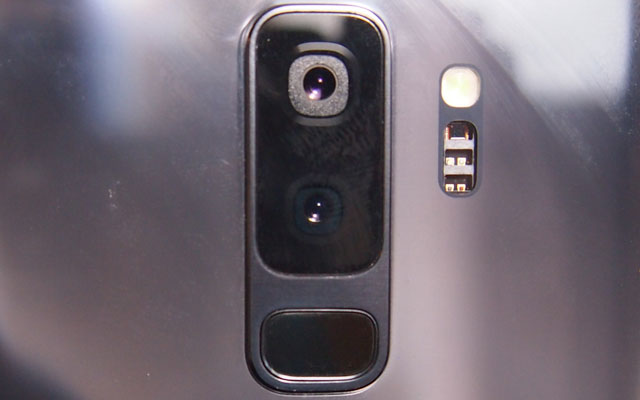 With the front cameras, you can take a selfie and turn it into an AR Emoji that looks like you. That extra processing power on the camera lets it take your 2D images and map out more than 100 facial features to create a 3D model that reflects your facial expressions in real time. The AR Emoji use a standard format so you can share them across most messaging platforms. 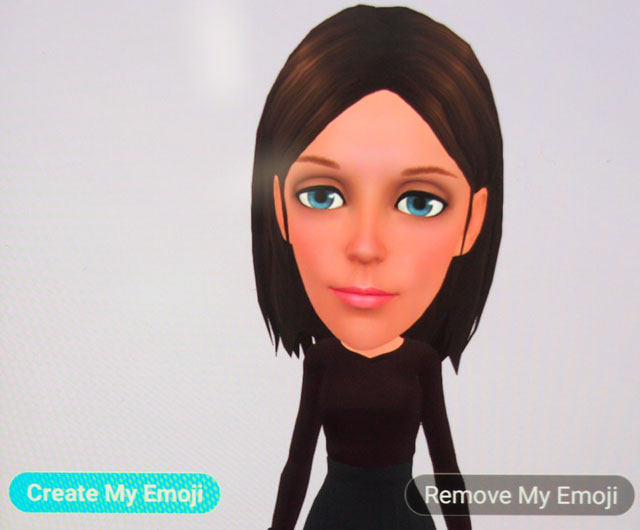 Samsung has upgraded the Bixby features of the camera, to add automatic translations in images with text, one-click shopping through retailers like Nordstrom when you see something you like and a makeup mode, which lets you try on makeup and then purchase products through retailers, including Sephora.

Samsung added a second speaker to the Galaxy S9 and S9+ for rich stereo sound. Both phones also support Dolby Atmos for a rich, virtual 3D sound experience. It's not just a gimmick: the difference between the S9/S9+ and the S8/S8+ is noticeable. 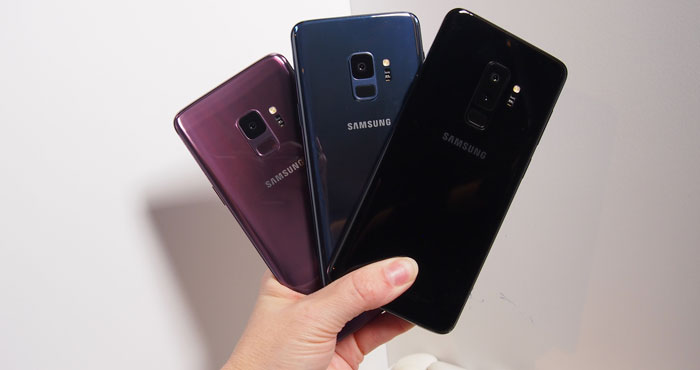 I’ve never owned a smart phone and when you say the sprint and verizon costs are so much a month is that just the service package for calls and internet?
I would like to get a smart phone to enhance my hobby of metal detecting and add maps and items like a small camera I can insert into walls that will plug into the smart phone.

Those are the costs for the phone, not the service

The costs in the story are for the phone itself, not the monthly service. You would still need a monthly service plan on top of that for calls and data.

I’m not entirely clear what you’re looking for with the camera. The smartphone has its own camera, so no need to plug another camera into it. If you mean remotely connecting to a wall-mounted camera from an app on your smartphone, that’s very doable. We actually just did a roundup of the best security cameras: https://www.techlicious.com/review/the-best-home-security-camera/

I meant endoscope camera that I can use to get inside places and see what is behind or inside tight places where a normal camera would not be able to access.  It is supposed to plug into a smart phone.  Instead of the expense of having a separate inspection camera and viewer, the endoscope can plug into the existing smart phone and keep my little hobby affordable.  thanks, josh.

Everday my wife has a bunch of numbers on it her number is 5404933010 think she is screwing around on me it one number keeps coming up 5408141526 she swears she is not but she has some kind of device on her phone like she knows every move I make screenshots keep showing up of me when I and by myself what will help?

both samsung galaxy s9 and galaxy s9 plus are amazing and the camera of these phones is simply amazing.

Thanks for this post.I need more detail for New Dual-Aperture Camera?