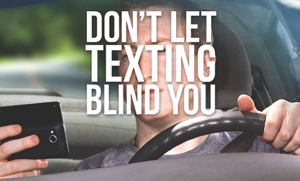 Chilling new research from the Cohen Children’s Medical Center in New York suggests that texting while driving has become the number one cause of death amongst teenagers behind the wheel, surpassing drunk driving for the first time.

An estimated 3,000 teenagers die each year due to sending and receiving text messages while driving, as compared to the 2,800 who died due to drunk driving. Another 300,000 teenagers were injured via texting – a number again higher than the 282,000 injured due to intoxicated drivers.

The researchers involved in the study suggest that the problem isn’t that texting behind the wheel is more dangerous than driving under the influence. The problem is that teenagers text far more often than they drink, especially while driving. Having more opportunities for accidents results in, predictably, more accidents.

Though the survey only took a look at the driving habits of teenagers, it would be safe to assume that texting while driving is just as dangerous to adults. A recent study by AT&T showed that nearly half of all adults text while driving – a rate even higher than amongst teens.

The results of this study seem to confirm a study from earlier this year stating that even hands-free texting is as dangerous as drunk driving. But though statistics may seem scary, there’s plenty you can do right now to help prevent a texting-while-driving accident in the future. Take a look at Techlicious’s guide to Safe Alternatives to Texting While Driving, which gives you a rundown of the top apps and services that restrict your teens’ phone use while driving.

Part of the reason the Don’t-Text-and-Drive campaigns aren’t working is because they’re not clear enough: http://www.longacre.com/what-parents-can-do-to-stop-teen-texting-and-driving/.