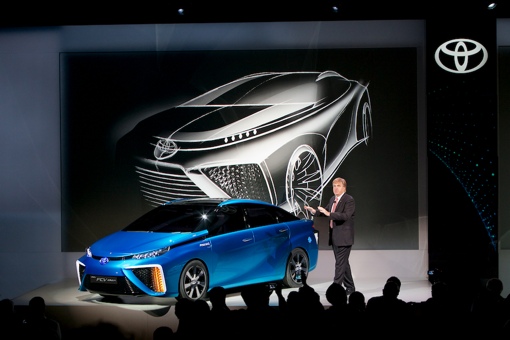 Car manufacturer Toyota announced today that it will launch the first ever zero-emission hydrogen fuel-cell vehicle (FCV) in the U.S. next year, but the futuristic car technology certainly won’t come cheap.

Toyota revealed its new FCV at a press conference in Japan, showcasing the exterior design of the sedan. The official name of the vehicle has yet to be announced, and we know nothing about the interior of the vehicle or other specifications. The company did announce the price tag, however: a whopping $68,000 when it goes on sale in summer 2015. That's approximately the same price as a Tesla Model S electric car.

“This is a zero-emission electric-drive, mid-size four-door sedan,” said Bob Carter, senior vice president of automotive operations for Toyota Motor Sales. “It produces sufficient electrical power to spin the electric motor for about 300 miles on a single fill-up which takes three to five minutes. This is going to be a very special vehicle.”

Indeed, the FCV sedan is special enough that it will initially be sold only in California, as the state is one of the few with hydrogen fueling stations currently in place. As part of its FCV initiative, Toyota will be financially supporting the construction and operation of 19 new California fueling stations for the car.

You can see the car in action in the short promotional video below. For more on the vehicle, visit Toyota.com.