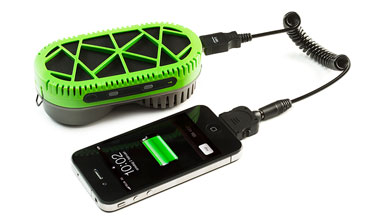 Imagine you’re off the beaten path relying on a GPS instrument to chart your way or a gadget to record photos and videos. While you could use a solar charger to recharge your battery, the process is time-consuming and weather dependent. One interesting alternative is a portable hydrogen fuel cell charger due to hit the market this spring.

Shown at a ShowStoppers event this week at the Consumer Electronics Show in Las Vegas, the PowerTrekk works with all devices that can be charged via USB. It’s about the size of three or four smartphones piled on top one another and works when you add to the unit a round fuel package called a “PowerPukk” and about a tablespoon of water. Snap it closed, attach your electronic device and the charge—about four hours worth—starts immediately.

But is it safe? The PowerPukk fuel cartridge contains a non-toxic powder that instantly reacts with the water, creating hydrogen energy in the process. California-based SiGNa Chemistry, the company that makes the PowerPukks, says it’s completely safe and the only emission from the chemical reaction is a small amount of water vapor.

While each PowerPukk is less than a pack of AA batteries at $4 each, the charging unit itself will run $199-$229.

TheSwedish company myFC which devised the PowerTrekk says the device is intended not only for naturalists but for those working in developing nations where power is either unavailable or unreliable.

One thing is certain, hydrogen fuel cells are something we’ll be seeing more of in the future. First created in the 1800s, NASA has used them to generate power for probes, satellites and space capsules and automotive manufacturers have been trying to figure out for years how to make the technology viable for widespread commercial use.