The Chromebook: A Great Second Computer

Take a moment to think about how computers are used in your home. How much of that time do you spend browsing the web, working on word processing documents or presentations and checking email and social networks? If your answer is a good chunk of the time, you may be a candidate for a Chromebook computer.

What can a Chromebook do?

Chromebooks run Google's Chrome OS, which looks like the Chrome Web browser but runs apps as well. In fact, there's a whole ecosystem of Chrome apps available through the Chrome Web Store. There are games, like Angry Birds Heikki, Battlefield and Need for Speed World; productivity tools, including Dropbox, Picasa and Evernote; and, of course there are the Google apps, like Google Docs, Gmail and Google Maps. Currently, there are tens of thousands of apps available through the Chrome Web Store—some that are primarily web-based and some that run within a browser tab, but have been downloaded and work offline. 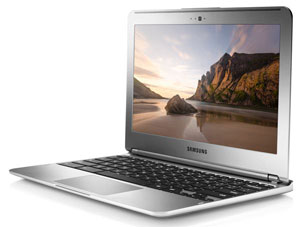 Who should buy a Chromebook?

Chromebooks are best for people who always have access to an Internet connection. That's because many of the apps are built to run online, though staples like word processing and mail will work offline as well. And, you'll be storing most of your documents online, which is fine thanks to the 100GB or more of free online storage that comes with all models.

How secure is a Chromebook?

Google has taken advantage of the way Chrome OS works to bring a high level of security to Chromebooks. The OS is automatically updated, so security fixes are automatically installed. Chrome OS treats each tab in the browser as a sandbox, so if malware is encountered, it can't leave. And, each time the system starts, it does a self-check and makes any necessary repairs. In fact, Google is so confident in the security of Chrome OS that the company just hosted a hack-a-thon and was not able to award anyone a prize for breaking in.

How much do Chromebooks cost?

The other selling point of Chromebooks is their ultra-low price point. Aside from the ultra-sleek, touchscreen Chromebook Pixel ($1,299) introduced earlier this week, models range from $199 to $329. Usually, when you see computers priced this low, it's a red flag for cheap, chunky construction, unresponsive programs and tiny keyboards and displays. Not so with Chromebooks. The svelte 11.6-inch Samsung Chromebook ($249) is just 0.7 inches thick, with sleek styling (albeit in plastic), and easily handles the Chrome apps. Likewise, HP Pavilion Chromebook ($329) tackles apps efficiently, but with a roomier 14-inch display.

Are Chromebooks right for kids?

Naturally, Chromebooks are an attractive option for parents to buy for their kids. However, there are no built-in parental controls—though they're in the works. And, technically, kids aren't supposed to have Google accounts (at least those under 13), unless they've received them through their school via Google Education initiative. So you'll have to share your account, when setting up a Chromebook for a pre-teen.

For many people, a Chromebook can't be their only computer. Either they don't have constant Internet access or they need to use software that not available in the Chrome Web Store, like Photoshop or Skype. You may also have to invest in a Cloud Ready printer if you don't have another computer with a printer attached. That's because you can't hook up just any printer up to your Chromebook. As a second computer, though, it's a great low-cost choice.

I agree for the most part

Hi,
I am typing this on my Samsung Chromebook. It is fine for what you described, but very specific limitations are present. When you described Dropbox as an app, for instance. That is not accurate. All one gets is a link to the web site for Dropbox. Other glaring omissions exist as well. Forget watching Quicktime files. No iTunes here, either. Not the end of the world. The Netflix streaming issue has been resolved. The battery life is outstanding. The weight and portability is great. It boots up very rapidly. I am pleased with the purchase.
Thanks,
Brian

A Chromebook is perfect for

A Chromebook is perfect for anyone worried that Google may be having problems tracking their every move online, this will ensure it.

You may want to wait to purchase one though, I hear they’ll soon be giving free sub-dermal gps tracking implants FREE with the purchase of any Chromebook.

Not having a CD player

Not having a CD player has alot of drawbacks and until you start using it, you just don’t realize how many.  I couldn’t download the software for my printer as promised and had to borrow a external dvd to load it.  Once I did, It seemed like half of my memory was gone.  I do have problems streaming as well.  Playing childrens games online like from Nick load quickly and easily on my laptop but slowly or not at all on the Chromebook.  I personally think its a bad investment.

What is lost does not equal what is gained

With the price of laptops and tablets dropping every month, I believe that Google’s Chromebook is not the same value that it might have seemed when the idea was first conceived.  The loss of memory and CD/DVD capabilities combined with the product’s dependency on the awesome yet fallible Cloud system make me wince!  I’m sorry, Google.  Your Chromebook has been weighed, it has been measured, and it has been found wanting, to paraphrase the “Knight’s Tale” and Daniel 5:27. :-(

If you’re still using a cd drive, then it’s probably time to update your tech skills.  Look up how to do a “cloud print”.

I think you guys are missing the point of a chromebook.