When horrific events such as the shooting in Aurora, Colo. unfold, it’s often on Twitter where news and updates spread the fastest.

However, with this latest tragedy many victims and witnesses turned to social news site Reddit, which turned out to be one of the best sources of information on the story as it unfolded.

For instance, the Reddit post titled “Comprehensive timeline, part 8: Aurora massacre (self.news)” is a continuation of an ongoing text submission that even now is keeping tabs on all sorts of information regarding the scene in Aurora, including how many victims are at various hospitals and the number of people who have been released, names and ages of confirmed victims, family support and crisis line phone numbers, up-to-the minute news and comments from users who link to things such as live streaming of the alleged shooter’s apartment. 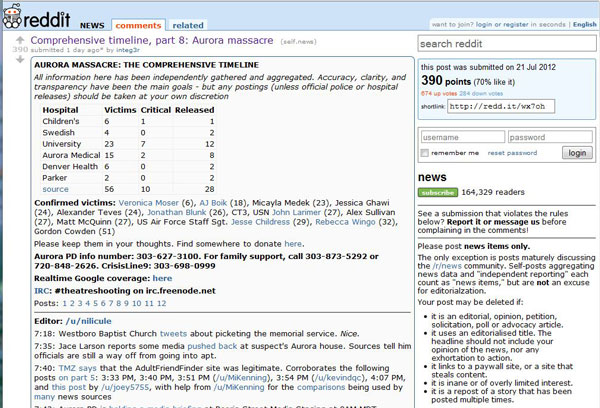 But what exactly is Reddit, and how does a person use it?

While the site can be tricky to figure out, if you’re willing to play with it a bit, Reddit can be a great source for interesting content.

It's essentially a bulletin board

Reddit is made up of posts submitted by users called “Redditors.” The site consists of hundreds of sub-communities or “reddits,” each focused on a specific topic, such as technology, politics and funny or unique subjects like “todayIlearned,” which, by the way, goes by the acronym TIL.

When you first sign up as a new user, Reddit automatically subscribes you to a selection of the most popular reddits, but you can customize what you see at the site by subscribing to topics you’re most interested in.

However, this is something you’ll want to wait to do until you’re familiar with how the site operates. Most likely there’s already a reddit for whatever you’re interested in and it can take a while to figure out which reddits are the best ones for submitting particular content.

Reddit has a ton of tips on how to use the site appropriately. Check out the exhaustive list of ”reddiquette.”

The more you contribute, the more karma you get

As you consume content at Reddit, you can upvote or downvote posts and comments. You get “karma” points for voting and submitting your own comments. These points lend you credibility within the community as someone who contributes valuable content to the site. Links that get the most upvotes reach Reddit’s front page, which changes constantly.

You can also use Reddit as a social network and "friend" users whose content you appreciate. If you notice that a certain user consistently shares things you like, you can click on that person’s username, which takes you to his or her profile where you can click on a green button in the right sidebar called "+ friends."

Doing so gives you more direct access to their posts and comments, which you can get to by visiting http://friends.reddit.com.

Reddit isn’t for everyone. For one thing, its users are overwhelmingly young and male and, as this PBS video points out, the site can be terribly sexist.

In the video, researcher Stephen Bruckert says, “Reddit overall is a nice place, but its relationship with women is really complicated. Any picture of a woman who is on the beach and she’s found a cute little turtle and is showing the turtle, the top comment will be about her breasts.”

There’s also a generous amount of adult content on the site (usually identified by the acronym NSFW), so it’s not a good place to let minors loose.

Even so, there’s are plenty of fascinating reddits to check out, such as IAmA ("I am a") in which users—regular people, celebrities, politicians and people with interesting professions or situations—prompt others to AMA ("Ask me anything").

Speaking of acronyms, Reddit is full of them, which is one thing that can be confusing for newcomers. Some of the most common on the site include: