One of the best accessories for airplane travel is a pair of active noise canceling headphones. They drown out much of the engines' roar as well as lower the volume on nearby conversations, while effectively raising the volume of any audio you're playing on a portable device or seat-back TV––and they may even help you to sleep more soundly in your seat.

But conversely, using noise canceling headphones also could make it difficult to hear announcements from the pilot (or the flight attendant offering drinks and cookies). Moreover, some of the leading models––including those from category pioneer Bose––won't work as regular headphones without the noise canceling feature enabled, so you can't continue to watch that TV or inflight movie during final descent when electronic devices must be switched off.

Audio quality varies widely among noise-canceling headphones, too, and usually correlates with price; if you want better sound reproduction you'll likely have to spend more money.

It was with these tradeoffs in mind that Tom DeVesto, the founder, CEO and designer at tabletop radio maker Tivoli Audio, says he finally devised his own ideal pair of noise canceling headphones, the Radio Silenz ($159.99 on tivoli.com)––which debuts in stores this month, and which I tested myself during a recent round-trip flight between Newark, NJ, and Detroit. 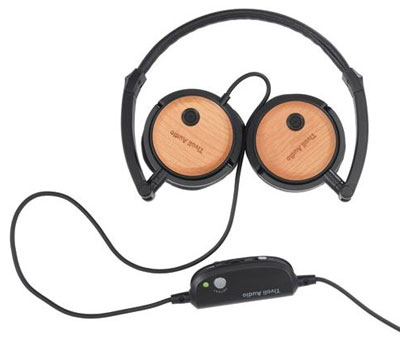 Like Tivoli's radios, the Radio Silenz are distinguished by their real wood encasements, here used for the outside of the ear cups, which DeVesto says contributes to better sound reproduction as well as enhances appearance. A module built inline with the connector cord contains an on/off switch for the noise cancellation function, a volume control, and a "defeat" button. Keeping the last pressed not only temporarily disables noise cancellation, but also interrupts audio playback and engages the noise cancellation function's integrated microphones to amplify ambient sounds (such as the pilot's announcement).

The inline module also holds a single AAA-size battery that will power the noise cancellation function for 50 hours, according to Tivoli. While it's working, it will cancel up to 85 percent of ambient noise, the company says. Even after the battery dies or noise cancellation is switched off, however, the Radio Silenz will continue to play audio like ordinary headphones.

During my own test, the Radio Silenz headphones performed well. The audio quality was very good, and the defeat button was a particularly welcome feature when the flight attendant appeared with the food and beverage cart.

These are Tivoli's first pair of headphones, and also the only ones the company will sell, DeVesto says. No other models are planned.

As is often the case with first attempts, however, there is room for improvement with the Radio Silenz package overall.

Although I find that 85-percent noise cancellation is effective in my home for vanquishing the sound of my air conditioner, on the airplane I would have liked more noise cancellation to better muffle the engines' roar. In addition, I was disappointed with the flimsy vinyl storage bag Tivoli includes with the headphones; I would have preferred a protective hard case, especially one that features a compartment for the cord and its inline module, which potentially could flop around in the bag and damage the headphones' wood. Ditto for the two-pronged airplane audio adapter that comes with the Radio Silenz but also has no place to call its own within the bag. (A Tivoli spokeswoman says the company will be including a leather travel bag with all Radio Silenz starting in late August or early September, rather than the vinyl bag included with earlier units, but no hard case is planned at this time.)

Those are minor quibbles, though, when compared with the total value offered by Tivoli's Radio Silenz––a good looking, high quality and convenient pair of noise-canceling headphones, selling for about half the price of high-end competitive models.