It is not a matter of if but of when you upgrade your existing iPhone to the new iOS 13 operating system. There are so many changes to so many apps, it’ll feel as if you actually got a new iPhone 11. Except you don't have to buy a new iPhone – all iPhones dating back to the iPhone SE and 6s, as well as the 7th generation iPod Touch, which came out this past May, can be upgraded to iOS 13 to take advantage of a wealth of new features and functions, which include:

There is no way for us to outline the dozens of new features and functions that have been added to iOS – there are more than a dozen in Maps alone – but these are our favorites so far.

Face ID: Apple says Face ID is now 30 percent faster. It seems much faster than that to me. I now barely lift my iPhone Xs Max, and the lock icon already starts to open, and it's ready to go in nearly a nanosecond. I have also noticed significant faster app opening and speedier operations across the iPhone board. 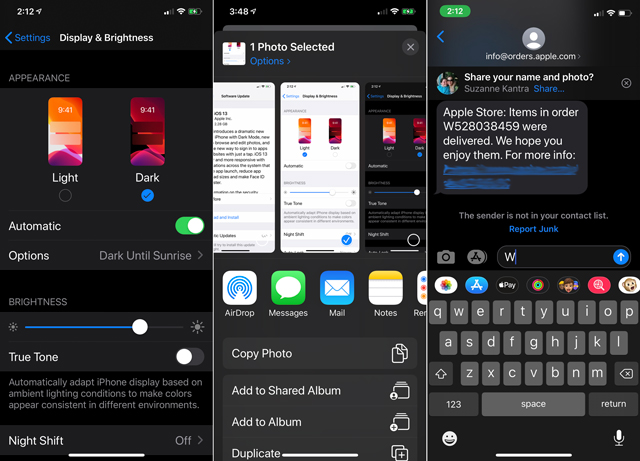 Dark Mode: Your iPhone battery's and your eye's greatest enemy is screen brightness. So for iOS 13, Apple lets you eliminate your iPhone's screen whiteness with Dark Mode. Dark Mode presents text lists, such as in iTunes, Contacts, Calendar and Settings, in white-on-black, and a more subtle elimination of unnecessarily white backgrounds for almost all apps and functions. For instance, app folders are now a calming translucent gray rather than their usual imperative white. But, my Kindle app still presents book text in the usual black-on-white. After just a few hours working in Dark Mode, I feel more soothed – although I'm not fond of email in white-on-black. How does this save battery life? No power is needed to make pixels black on an OLED screen (these pixels are simply turned off), and much less power is required for backlighting a mostly black background on an LCD display, such as those on the Xr and all pre-X iPhones. You can set up Dark Mode to activate after sunset or permanently. I recommend it – you can easily switch back and forth in Settings > Display/Brightness.

Maps: The big upgrade in Maps is Look Around, which isessentially Apple's version of Google's Street View. So far only a few cities have been included, however – and one of them is NOT New York – so it's kind of useless until Apple adds more cities, as it's promised to do. If you want to experiment, San Francisco is live. We're far more thankful for a new Feedback tool that lets you report frustrating wrong turns, addresses, missing, closed or non-existent businesses, et al. Hopefully, diligent users will help make Apple Maps more accurate. We also love the new Share ETA, which will let you send you estimated arrival time from the Maps app to selected contacts.

Siri: You can now ask Siri to open any app, not just Apple apps, which is especially handy if you can't remember which folder you tucked the app into. But once you've told Siri to open the Camera, she can't then be ordered to take a picture. That would be really handy – especially since snapping a photo via voice has been part of the Android OS for years, which makes its continuing omission from iOS particularly galling.

Photos App: iOS 13 includes a wealth of new photo editing features and effects, including individual controls for saturation, vibrance, warmth, and noise reduction. Even better, nearly all of them are now available for video as well, including ones you've already shot. Note that the magic wand, which automatically enhances your photos, is now found with thes manual controls in Adjust (the icon that looks like a clock face with one hand surrounded by a dotted perimeter). Overall, it may take some practice to master all the new editing choices, so make sure you first duplicate your photo or video before experimenting.

Mail App: You can now adjust font, text size and color when composing email on an iPhone, as well choose from a variety of paragraph formats, which means it may not seem apparent that you're responding via your phone – unless you forget to change the app's default "Sent from my iPhone" signature (which you can customize in Settings > Mail > scroll down to bottom for Signature).

Shortcuts App: With Shortcuts Automations, you can now  program actions to happen by themselves, such as a particular playlist in Apple Music starts to play when you get into your CarPlay-enabled car or send a text message at a specific time

For Air Pod owners: You can now pair two sets of Air Pods to a single iPhone so two can now listen to music or a movie together. Apple says that  in the future, some Bluetooth Beats models will also be able to take advantage of this feature. Siri Message Announce lets your second-generation Air Pods read your messages to you instead of digging out your phone to read them

You can survey the myriad the new iOS 13 and 13.1 bells and whistles on Apple's own iOS 13 page to experiment either now or next Tuesday, depending on when – not if – you upgrade your iPhone.

Should you upgrade to iOS 13 now?

Several reviewers who got preview versions of iOS 13 have reported myriad hiccups and bugs. During my own brief fling with iOS 13 over the last few hours, I experienced none of the issues these reviewers found; it could be that Apple massaged the general release of iOS 13 after the reviewers downloaded their preview versions.

But if you're worried about installing the first version of iOS 13, you won't need to wait long for fixes. Apple has broken iOS 13 into two distinct pieces: 13.0, which was released last night, and 13.1, which is scheduled to be released next Tuesday, September 24, 2019 – six days earlier than Apple had originally announced.

Don't try to upgrade your iPad to iOS 13

In addition to breaking iOS 13 into two parts, Apple also has created a new, separate operating system for iPad called, appropriately enough, iPadOS, which also is scheduled to be released on September 24, 2019.

Where is the LookAround app?

I’m unable to find this on my 8 plus.  Is it only available on X?