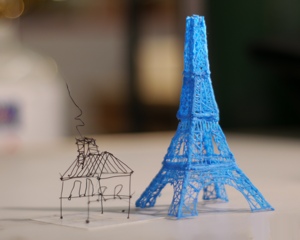 CES 2014 isn’t all about high-tech curved televisions and eyeroll-worthy buzzwords like “enterprise cloud synergy” – there’s some smart old-school tech on display as well. One such item that caught our eye Tuesday is the 3Doodler art pen, capable of creating plastic sculptures in 3D.

I was able to go hands-on with the 3Doodler at CES and it’s a fun little tool. You start by extruding plastic onto a piece of paper to anchor it down so it doesn’t move. Then, you move the pen through the air, holding down the extruder button and leaving a trail of colored ABS plastic as you go. The pen has two different speed settings, and feels a lot like a modern take on a hot glue gun. The plastic cools almost instantly, holding its shape.

There’s a definite learning curve to the device. Creating something neat requires a little bit of planning, but once you get the hang of it, the 3Doodler can create some neat designs. My first attempt at 3D art definitely won’t make it into a museum, but the folks working the 3Doodler booth were able to quickly make crude plastic dogs. And as you can see in the picture above, creating large sculptures is possible (if pricey, given the cost of extra ABS plastic strands).

Fun though it is, it’s important to note that the 3Doodler isn’t for small kids. Like a hot glue gun, the tip of the device gets incredibly hot (464°F) and can hurt tiny hands. Even older kids should be warned about the potential dangers to themselves and to your furniture. And don’t forget that small pieces of plastic can be a choking hazard.

The 3Doodler was a Kickstarter project last year, but it's since gone mainstream. You can find the 3Doodler at ThinkGeek at the end of the month and in Brookstone stores by spring. It can currently be pre-ordered at the 3Doodler website where $99 buys you the pen plus 50 strands of ABS plastic. Extra plastic can be purchased in your choice of colors for $9.99 per 25 strands.