by Elizabeth Harper on May 09, 2017
in Automation Systems, News, Music and Video, Music & Video Services, Health and Home, Blog :: 2 comments

In addition to everything you can already ask Alexa to do — like managing your calendar, ordering items from Amazon, playing music or controlling your smart home — the Echo Show can play YouTube videos, show you video from your home security camera or make video calls. These extra features make for a handy multipurpose gadget that you could fit in anywhere in the house: as a smart alarm and calendar in the bedroom, a family message board in the kitchen, or just a smarter Echo device wherever you want one. 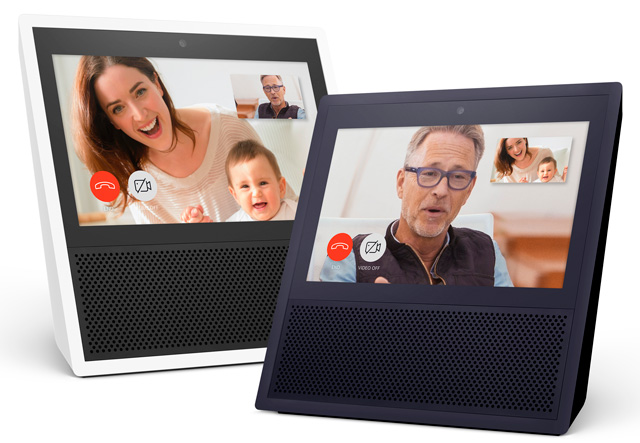 While video and voice calling is the Echo Show's stand-out feature, you'll also be able to make calls from your other Echo devices (including the Echo, Echo Dot and Amazon Alexa app for Android and iOS). Your Echo will need a Wi-Fi connection to make calls, but the service is free and doesn't require a phone line. All you have to do is add friends and family to your contact list; then you can ask Alexa to:

When you get a call, your Echo will light up and ring, just like a phone — only it's all hands-free.

The Echo Show is the most expensive of Amazon's Echo devices at $229.99, but if you buy a pair of them, you currently get $100 off. That brings the price to $179.99 each, or the same as the Echo — and lets you make two-way video calls. But if you want Alexa's new calling features on a budget, you can pick up the Echo Dot for just $49.99 or use the free Alexa app for your smartphone or tablet.

If you aren't ready to upgrade to an Echo Show, voice calling features will be rolling out to the full Echo lineup soon.

How’s things?, sometimes I see a 503 website error when I view this website. I thought you may wish to know, best wishes

Thanks, probably a blocking issue

If you’re seeing a 503 error, there’s a good chance that you’re using an IP address that we’ve blocked at some point in the past because of high spam volumes. If you send me your IP address when you’re getting that error, I can check it out. To find your IP address, simply enter “what is my IP address” in your browser search. You can send it to me at josh@techlicious.com.

FYI, your comment was automatically blocked by our spam prevention software (I had to unblock it). So it would appear that whatever IP you’re using has issues with bad actors.