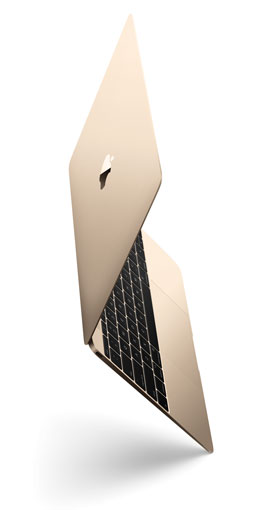 The all-new MacBook comes in silver, space gray and gold.

If you thought even the MacBook Air laptop felt too thick and heavy for your comfort, Apple has just unveiled an all-new, redesigned 12-inch MacBook laptop that measures just 13.1mm at its thickest point — that’s 24 percent thinner than the Air — and weighs just two pounds, a pound less than the Air.

Encased in an all-metal enclosure, this skinny new MacBook contains a new keyboard with keys that are 17 percent larger and built on new, more stable mechanisms to ensure accuracy no matter where they're struck. Also new is a force touch trackpad that handles not only multi-touch gestures but also can produce actions depending on how hard you push it. Press hard on a word to get a Wikipedia entry; hard-press the time or date in an email to create a Calendar entry; or hard-press an attachment to see a preview, among other clickless capabilities.

Apple has shrunk the new laptop’s logic board, primarily by getting rid of the fan, inventing new stacked, terraced battery layers to fill every tapered space inside the enclosure. As a result, Apple has produced what it calls the world's most energy-efficient notebook, able to provide "all-day" battery life of up to nine hours of wireless Web browsing or up to 10 hours of videos.

All the MacBook’s familiar jacks and ports have been eliminated, replaced by a single new USB-C jack that will accommodate a variety of power, file transfer and video connections via a reversible cable. USB-C is a new industry standard, and a multitude of adapters and accessories are likely to become available.

The MacBook is available for pre-order for $1,299 on Amazon

thanks for the news. This Macbook seems like the perfect travel companion for digital nomads working from anywhere. I’m just not sure about the only one USB port. This is a limitation but one may get around it with adapters.