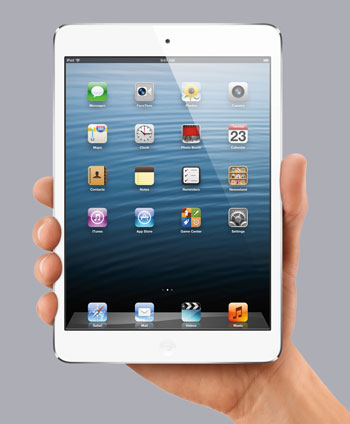 Apple yesterday introduced its long-anticipated "iPad mini," a smaller, thinner and lighter version of the company's popular tablet. It adopts some of the high-tech features found in the company's new iPod touch, including a 5-megapixel iSight camera on the back, a FaceTime HD camera on the front and the company's new Lightning connector on the bottom. It also shares features with the iPad 2 (new in 2011), it has the same lower-resolution display technology––rather than the super-crisp Retina Display incorporated into the new iPod touch––as well as the same "A5" chip that powers that older iPad.

The iPad mini is Apple's new entry-level model in the iPad lineup. The iPad 2 will continue to be available as the mid-range model. And in a surprise move today, Apple also introduced a new top-of-the-line fourth-generation iPad. It supplants the third-generation model that was introduced just over seven months ago––updated with a more powerful processor, better graphics and faster Wi-Fi technology.

At a glance, the most obvious difference between the iPad mini and its larger siblings is in its screen size: 7.9-inches diagonally versus 9.7-inches diagonally. Yet because the mini's display shares the same 1024 x 768 pixels resolution as the iPad 2 display, it won't require new apps to be specifically designed or modified for it; all of the more than 275,000 apps already developed specifically for the larger iPad models will work on the mini immediately.

That it's thin and light also is immediately apparent; At just 7.2mm deep the iPad mini is no thicker than a pencil, and at only .68 lbs. it weighs about the same as a pad of paper, noted Phil Schiller, Apple's senior vice president of worldwide marketing.

How iPad mini stacks up

"There is inherent loss in just reducing a product in size," said Jony Ive, Apple's senior vice president of industrial design. "But what we did was...design a product that was a concentration of, not a reduction of, the original."

The specifications may tell a different tale. Both the Nook HD ($199 on barnesandnoble.com) and Kindle Fire HD ($199 on amazon.com

Additionally, whereas Apple aims its iPad mini and other iPads at solo users, Amazon has designed the Kindle Fire HD to be shared among multiple users, each of whom can set up a unique profile with a service named FreeTime. Each profile offers its own selection of books, apps, games and videos, and each can have an associated usage limit––so, for example, parents can allow reading all day but restrict play time to an hour a day.

However, Apple's Schiller contends that real-world use will ultimately set the iPad mini apart from its diminutive competitors. Comparing it in his presentation to what appeared to be a Google Nexus 7, Schiller noted the iPad mini's overall display area is 35 percent larger than that of a 7-inch display (29.6 square inches vs. 21.9 square inches). Which translates into more visible content on the screen when surfing the Web, he said––by a 50 percent margin when the iPad mini is held upright (portrait style), and a 67 percent margin when held sideways (landscape style). 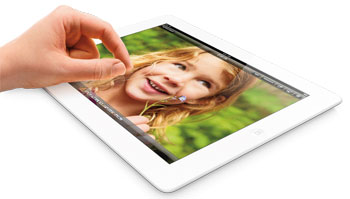 The hallmark of the fourth-generation iPad is a powerful new main processor, named A6X. It makes this iPad twice as fast as the third generation iPad for graphics-intensive tasks, such as playing video games, or other applications that rely heavily on the device's computing power.

I’m an Apple fanatic, I drank the kool-aid. However this time around I must say that Apple got it wrong. The iPad mini is a disappointment. It doesn’t seem to be as complete as the Nook or the Kindle and with the price, well it just isn’t going to get me to run out and buy it. If it was around 200.00 I was considering buying one for my grandson for Christmas, but not at that price. Sorry Apple, but I think you blew it this time.

I have the common stock, 2 macs, 1 macmini, 1 Ipod, 1 IPAD2 and I like this mini.  I think it is aimed at an older generation who might want a light product to carry around.  With this less than 1 pound device, I get a camera, a note pad, a telephone, office apps,music,  newspapers and books to carry on the plane and on vacation.  I can leave the rest behind and not break my back.  I can drop in my handbag and go shopping look up prices, comparison shop etc.

Having already tried (and returned) the Kindle Fire, I’m likely to switch to the Mini from my regular-sized iPad 2. However, I’m not completely convinced that I’m going to do so. But having experience both the Kindle Fire and the iPad, I can say without hesitation that the Kindle Fire is terrible. Your mileage may vary.

Ipad Mini will work with Apple TV but the Kindle Fire HD has Micro-HDMI, Micro-USB which I can connect to HDMI TV to watch media from the internet on TV.  I can get Amazon Prime subscription for under $100 and have access to lots of media, free shipping.