Can Telemedicine Save You a Trip to the Doctor? 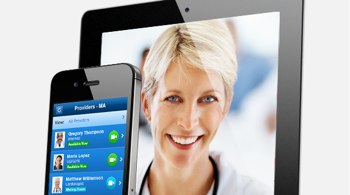 Going to the doctor can be a hassle. Not only do you have to get there — which costs time as well as money for gas or public transportation — but once in the door, you often have to sit around in a waiting room exposed to people who could make you sick.

Thankfully, technology today has evolved to the point that you might not even need to be in the same room with your physician to receive a consultation or treatment. The system is called telemedicine, and it involves using a webcam-enabled computer, smartphone or connected gadget to transfer information between you and your doctor.

According to Jared Rhoads, a senior research specialist with CSC, an IT services and solutions company based in Falls Church, Va., the term telemedicine can be used to describe a wide variety of uses that fall into four general buckets.

In telecare, modern technology allows caregivers to remotely monitor people with chronic issues. For example, someone with congestive heart failure could step on a Wi-Fi-enabled scale to automatically send daily weight measurements that could signal dangerous fluid retention or loss to a caregiver, who can take action if measurements are out of whack.

Telecare can also benefit people in assisted living, such as those with dementia.

“Home sensors can detect if a person has gotten up in the morning — and let’s say their daily routine is to put a kettle of tea on and turn on a light in the bathroom, a set of definable, measurable things," Rhoads said. "You can have a sensor system that tries to detect whether a person appears to be up and about and doing their daily thing, and if not, then it will send an alert to a family member or some other caregiver.”

Basic telemedicine, a type of telemedicine that's been going on for decades, uses videoconferencing or telephone calls to connect patients with one or more consulting physicians. It’s particularly helpful for people in rural settings who may not have physical access to specialists.

“If you need a consult right away from a certain type of neurologist, let’s say, there might only be a few available in the state and you might be hours away from where you could possibly meet them," Rhoads said. "But if you can go to your local community hospital and then even if they don’t have that kind of skillset on staff, they can contact someone and do a consultation through telemedicine.”

“The better the quality, the more pleasant the experience and everything, but it doesn’t really hinder the discussion because it’s mostly about the audio, exchanging the information and talking with your doctor,” he said. “If you’re doing something skin-related and you’re talking with the dermatologist about a suspicious mole, they’re probably going to ask you to take a picture with a camera anyway and then email them the picture, or they might have a website where they can direct you to and then you upload it directly to them.”

Mental healthcare in which psychiatrists connect with patients by video is another hot area within the telemedicine space. “The camera is just secondary," Rhoads said. "You just need a voice on the other end of the line to talk to.”

The notion of “quantified self” involves tracking metrics about yourself such as your heart rate, weight, what you eat, your activity and much more over time, often using some kind of gadget in conjunction with a smartphone app. For people with health issues, scads of Internet-connected devices exist that do things such as monitor blood glucose levels or blood pressure and store metrics in the cloud, where you can see levels on a timeline as well as easily share this information with a healthcare professional.

“Especially when you have a newly diagnosed diabetic, it’s a real education- and training-intensive thing to get a new patient trained so they can stay on top of their own condition and do a really good job of self-management,” Rhoads says. “So that kind of hand-holding during that maybe the first six months that someone has been diagnosed with diabetes tends to be a good and successful application.”

The limits of telemedicine

Many healthcare diagnoses require diagnostic techniques such as MRI or X-imaging, so if whatever ails you involves giving a doctor a look into the inner tissues of your body, you’re going to have to physically take yourself to a medical facility. It's the same principle for blood work, bacterial cultures or stool samples — these are things most people can’t handle at home and not appropriate for sending to your physician via mail, if avoiding travel is your goal.

Getting stared with telemedicine

The adoption of virtual visits with doctors via telemedicine isn’t mainstream yet, according to Dr. Joseph Kvedar, director of the Boston-based Center for Connected Health.

“We’re still in somewhere between early adopter and early majority, so the chances are high that if you went to your doctor and said ‘Hey, I want to start doing visits virtually,’ they would probably discourage that," he said. "They would have either quality concerns — maybe their lack of familiarity — or at some point they might have reimbursement concerns because unless they’re in a system that’s promoting shared risk … Then they might be essentially working for free by doing it virtually, so that wouldn’t be appealing.”

Even so, talking to your doctor about telemedicine is a good first step, Kvedar suggested.

“Let’s suppose you have high blood pressure, diabetes or one of those conditions, and you say ‘I really want to get more involved by monitoring my health; how can I interact with you, my physician, to monitor those data, record them and make them relevant to your decision-making?’" Kvedar said. "Many docs will engage with that."

Some state regulations dictate that patients must meet a doctor in person before he or she can prescribe medication. “Only 13 states clearly allow doctors to establish a patient relationship —typically required to prescribe drugs — without at least an initial in-person visit, according to the Robert J. Waters Center for Telehealth & e-Health Law,” reports The Wall Street Journal.

Teladoc and American Well are similar options, with the latter also offering mobile apps as a way to interface with a doctor.

Telemedicine is a burgeoning space that’s innovating at a rapid pace, and you’ll want to pay attention if getting a diagnosis from home sounds like a good idea to you.

Rock Health, a San Francisco seed accelerator that funds digital health-related start-ups, surmises Apple is stealthily working on a health product. Clues include the fact that the iPhone is loaded with sensors, and CEO Tim Cook is on record as saying, “The whole sensor field is going to explode.” The company is hiring medical device experts, and the iPhone 5s uses the M7 coprocessor, which is designed to monitor physical activity. 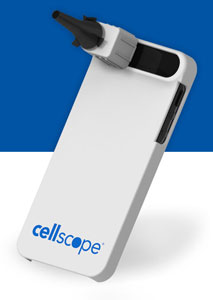 CellScope Otos is another system to watch for. It’s an otoscope for the iPhone that collects high-quality images of the ear canal and eardrum to diagnose ear infections and track them over time. Currently in use by early adopter doctors, it will soon be sold to clinician users for around $200.

A CellScope device for consumers to use at home — a boon for parents with young children — is planned for launch later this year. The idea is that home users could send images to their own doctors for diagnosis (or get connected to a different doctor if theirs doesn’t participate in Cellscope’s program). The company says it’s also working on software tools that would give users an immediate analysis of what’s going on in their ears.

And designed to aid with the early detection of disease, uChek turns an iPhone or Android phone into an accurate urinanalyzer that can measure urine parameters such as glucose, protein, urobilinogen, calcium, blood, creatinine, pH, ketone and much more. At last check, the India-based company was working toward FDA approval.

Stay tuned — these examples of telemedicine are just a tiny sample of what you can expect in the near future. Want to know what kinds of gadgets can help you now? Check out What’s New in Activity Trackers, SmartWatches and Other Wearable Tech.

This is very interesting