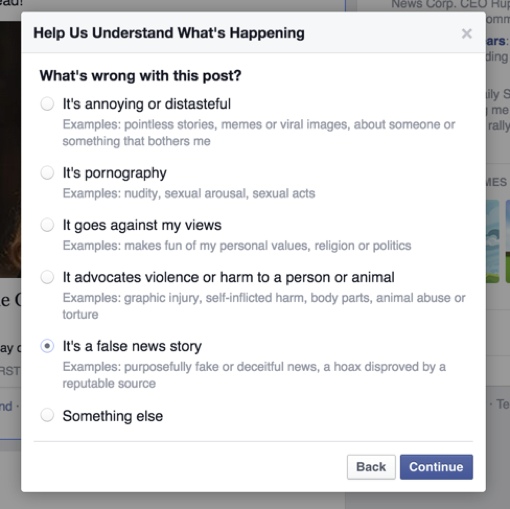 Facebook has just struck a major blow for truth on the Internet. This week, the social network announced a change to its News Feed algorithm to reduce the number of shared news stories that have been reported as hoaxes or misleading.

According to Facebook – and as a Facebook user, I can confirm – hoax posts are a big problem on the site, especially given how many people get their news simply by reading headlines. People routinely share and repost fake news items (such as this one from satire site The Daily Currant, Poll Shows 67% Of High Schoolers Think MLK Was An American President) unaware that the content is not factual. These items often generate comments from friends singling out the content as a hoax or linking to a website like snopes.com. “Our testing found people are two times more likely to delete these types of posts after receiving such a comment from a friend,” Facebook’s Erin Owens and Udi Weinsberg write.

As a result of the change, Facebook’s News Feed algorithm will now take into account the number of people who have flagged a story, status update, photo or video as a hoax (a reporting option when you choose to hide a story from your Timeline), and the number of people who have later deleted the story from their timelines, when deciding what content to share with you on your Timeline. These shared stories will not be deleted from the site, but they will see a far lower distribution than they usually do. Misleading content will also be flagged with warning stating, “Many people on Facebook have reported that this story contains false information.”

I’ve been tricked by a handful of these hoaxes myself, so I won’t be sorry to see them fade into obscurity. That said, Facebook’s new algorithm change could have unintended adverse affects. A factual story about global warming could potentially receive a number of “hoax” reports simply because it’s a contentious political issue, for example. Facebook, for its part, says that the “vast majority of publishers on Facebook will not be impacted by this update.”

I maintain fines of $10 for any of my friends reposting scams or hoaxes on Facebook. So far, no one has paid me any of the copious number of fines I have imposed. But once I figure out a better collection method, I’m going to be rich.

They Get Me Almost Every Time!

Especially if the “hoax” is about Facebook and it sounds reasonable, I will buy into it and pass it on, but like I said, it has to sound reasonable. Not the ones regarding “fines”, etc. I usually never share or pass on News Stories, for I know personally that the media, especially since 2005, has truly list their ethics in reporting the truth.
Thanks for this article, I shared it on Facebook! LOL!