OnePlus, known for delivering impressive Android phones at reasonable prices, launched two new flagship 5G phones, the OnePlus 8 and OnePlus 8 Pro, today. As in years past, these two new models offer competitive specs to this year’s Samsung Galaxy phones (the Galaxy S20 models) for hundreds less. But do they offer enough value? We got our hands on the new models for a first look.

Both the OnePlus 8 and 8 Pro have a curved front and virtually bezel-free design, with tapered sides and rear glass panels – similar to the Galaxy S20 models. And, they have a pinhole camera for an all-screen look. The OnePlus 8, with its 6.55-inch display, is larger and slightly heavier (6 ounces versus 5.74) than the 6.2-inch S20. And the OnePlus 8 Pro, which is 6.78-inches is also slightly larger and heavier (7.02 versus 6.56 ounces) than the 6.7-inch S20+.

Both OnePlus handsets feel comfortable to hold, with easy access to the power and ringer controls on the right spine. The left side houses the volume rocker. On the back of each handset there’s a vertically stacked line of three camera lenses, while the 8 Pro has one extra lens alongside the line of stack. Both sets of lenses of the OnePlus phones are significantly smaller than the huge rectangle allotted to the Galaxy S20 lenses.

Like the Galaxy S20 models, the OnePlus 8 Pro has an IP68 rating which means it will survive a drop into water or getting wet in the shower. The OnePlus 8 is not water resistant, though OnePlus says it “builds and tests its phones so they handle water resistance in everyday situations.” 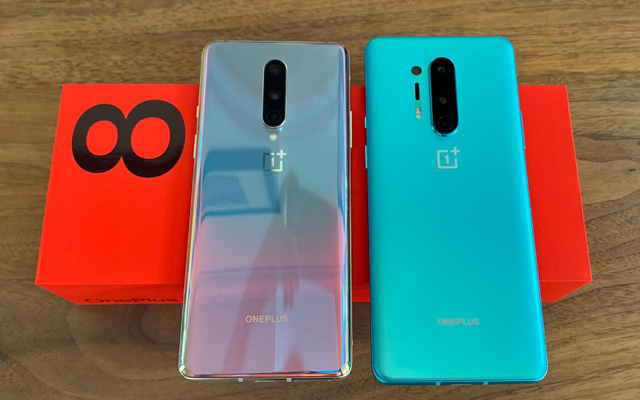 The OnePlus 8 comes in Glacial Green and Interstellar Glow, a kind of glossy mirror finish with a gradient of colors, which reminds me of the Samsung Galaxy Aura Glow design. It reflects and picks up the color of what’s around it, which made for a beautiful sunset image (see below). The OnePlus 8 Pro will be available in Glacial Green, Onyx Black and Ultramarine Blue. 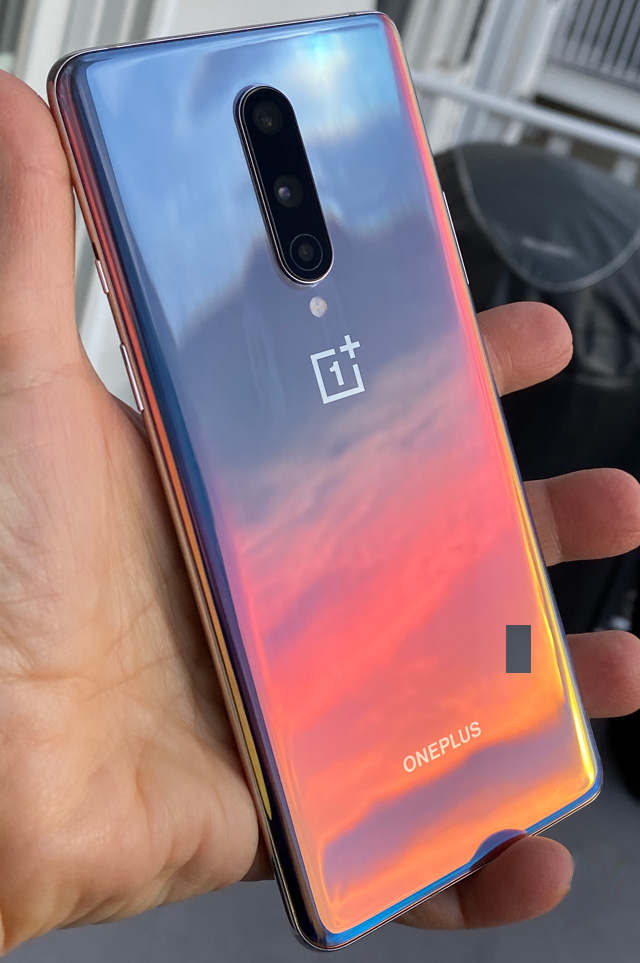 One area that the OnePlus 8 and 8 Pro lags slightly behind other flagship models from Samsung and LG is photography. Both Samsung’s Galaxy S20 and LG’s V60 phones have 64MP main rear cameras and can take 8K video. The OnePlus 8 and 8 Pro have 48MP main cameras with a large f/1.7 aperture to allow for more light in low light situations. Samsung’s S20 and S20+ have f/2.0 lenses.

The OnePlus 8 Pro does have an impressive new 48MP ultra-wide angle camera with a 120-degree field of view and Nightscape mode for taking sharp images after the sun’s gone down. Samsung’s S20 ultra-wide angle cameras are 12MP.  For clearer shots from far away, the 8MP telephoto lens is capable of 3X telephoto with up to 30X Digital Zoom. A new Color Filter camera, which supports cool light effects and filters, is 5MP with an f/2.4 aperture. 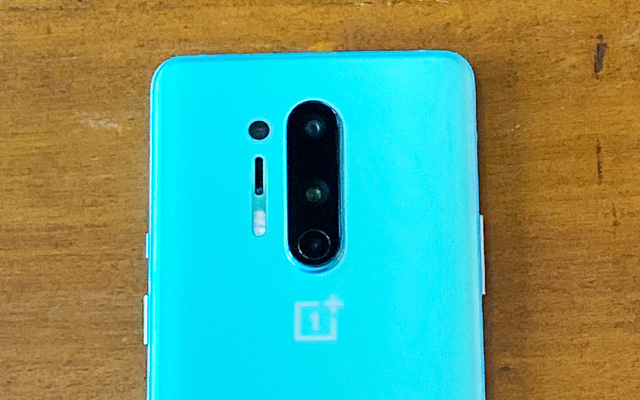 The OnePlus 8 has three camera lenses: a 48MP main, a 16MP ultra-wide angle and a 2MP macro lens. The Macro has an f/2.4 aperture for zooming in on the closest details.

Both devices have a 16 MP front camera that can shoot 1080p video at 30 frames per second. The main cameras can shoot 4K video, 1080p, super slow motion and time lapse.

Both phones have a new feature called Smart Pet capture that uses facial recognition to track, focus and shoot the perfect pet shot.

Both phones have Dolby Atmos audio, facial recognition to unlock as well as an in-display fingerprint, much like Samsung’s. It works really well, I was able to create a fingerprint with just a few taps of the screen and it read it on the first try each time.

They run OxygenOS (OnePlus’ operating system), which is based on Android 10. It’s a clean software build without a lot of extras to slow you down.

OnePlus finally added wireless charging capability, but only for the OnePlus 8 Pro. The OnePlus Warp Charge 30 is a stand-like device (available as a $69.95 accessory) with, as the name suggests, 30W of power.

That’s about double the power you get on the Samsung Galaxy S20 Ultra which uses 15W Qi-based wireless charging. OnePlus says just half an hour of wireless charging can bring your phone from 1% to 50% with its Warp Charge 30 Wireless Charger ($69.95), though we have not tested that claim. This is OnePlus’ own proprietary charger, but wireless charging works with more common Qi-enabled pads you might already have, just at a slower speed. Reverse wireless charging is also present on the phone to charge up other devices like headphones. Using the Warp Charge 30T wired charger, you can get to 50% in just 23 minutes.

These phones have some impressive specs for their price range, and they start at a few hundred dollars less than the Samsung Galaxy S20 series which starts at $999. The S20+ is $1,199 and the S20 Ultra launched at $1,399.

If you’re looking for a new smartphone with flagship specs and a knock-out display, take a look at the OnePlus phones. They match many of Samsung’s specs in hardware and performance, and even surpass the wireless charging speed and look. All for a few hundred dollars less.

The OnePlus 8 will be available on April 29th at OnePlus, Amazon, T-Mobile and Verizon.