Hands on: HTC RE Camera 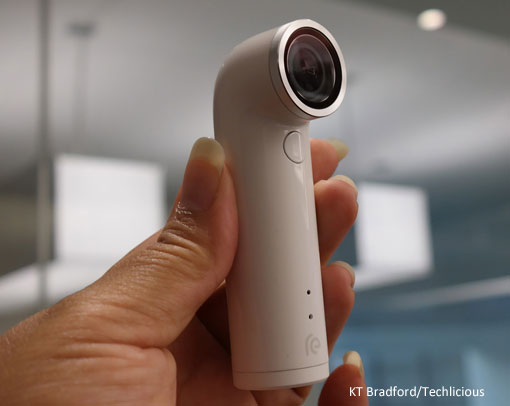 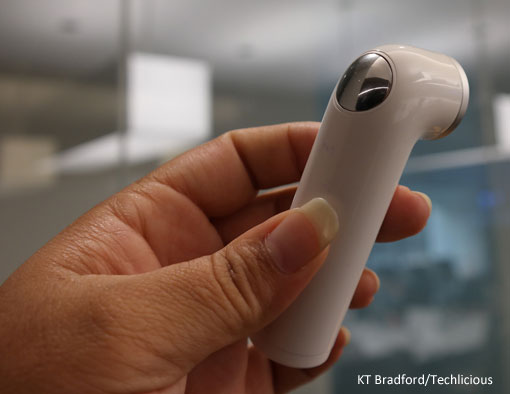 Though HTC is best known for smartphones in the US, the company has a long history of making other devices. It also has a reputation for innovation in the camera space, even if limited to technology found in phones. Now HTC is stepping out and trying it's hand at a standalone camera. The HTC RE is a 16MP viewfinder-free camera that's sort of a hybrid between a GoPro/ActionCam style device, the Sony QX lens camera, and wearable lifelogging cameras. It will be available "in time for the holidays" for $199.

The RE's profile is smaller than most cameras built for action capture and features a cylindrical shape that makes it clear it's meant to be held. The base is wide enough that it can stand by itself on a level surface. It also includes a standard tripod mount if you want it up higher or at an angle.

The RE is lighter than it looks and, though the casing is plastic, it feels like it can handle some rough and tumble. There's no lens protection by default -- a carrying case and lens cover will be available -- so I'd worry about it getting scratched. Otherwise it feels like something you can just throw in a bag when going on a trip or out to an event.

The body is waterproof and incorporates capacitive touch sensors. When sitting alone, it goes into sleep mode to conserve battery. But once you touch it, the camera is ready to go and can snap pictures instantly.

There's no screen or viewfinder, so the functionality is simple and basic. Press the button on the back once to take a picture, press and hold to start video recording (up to 1080p). Images and video save to a microSD card on board; HTC provides an 8GB card with purchase.

The lack of viewfinder shouldn't mean a bunch of photos where the subject is cut off. The lens captures a very wide angle, so as long as you're pointing the RE in the general direction of the subject it should get everything. Since the lens is small and focus is automatic, it's best for shots of fairly close-up subjects and not landscapes or far-away action. During my hands-on time I noted a fast shutter, perfect for capturing kids and pets who never want to sit still.

If you want to extend the RE's functionality, you can pair the RE with a smartphone or tablet (Android only for now, iOS to come later) to share photos, set up cool features like time lapse photography, and get a live viewfinder. As with other live viewfinder apps from Sony, Samsung, Canon and others, you can take a picture or start recording video from the phone/tablet.

Pairing also gives you access to easy image backup and some advanced editing and sharing capabilities through the Zoe app. Zoe was first developed for the HTC One M7 and some of it's features (such as auto-compilation of highlight videos) were available on the One M8 at launch. HTC decided to take the service further by making Zoe accessible via the web and releasing the app to the Android world at large. Any phone or tablet running Android 4.3 and 4.4 is compatible with Zoe. Same with the RE camera. And once you sync the photos and videos from the RE to your device you can import them into Zoe and start making highlight videos with that content, too.

Is the HTC RE better than your average smartphone camera? In image quality, yes. And it's faster at shooting images than the Sony QX cameras because it doesn't fully sync images to the phone until you ask it to, but thumbnails of your images will show up on the phone right away. But people are used to knowing how a picture will look and reviewing them right away on digital devices. It's a bit old school to snap a picture and check it out later, but HTC feels that it will make you more present at events where pictures are just as important as memories.