Hands-on with the Asus Fonepad 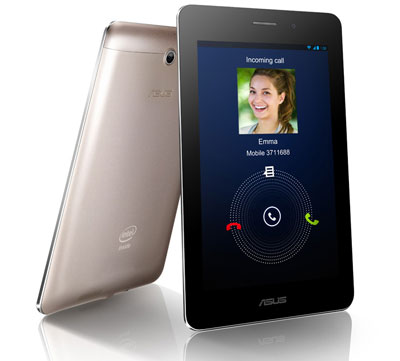 The Asus Fonepad was one of the big stories at Mobile World Congress and one of the big idea tablets coming this year. At $249, this 7-inch tablet packs a reasonable set of specs, and adds one feature that sounds both audacious and appealing at the same time—it doubles as the largest mobile phone announced yet.

The tablet has caught some teasing for this: After all, holding a 7-inch tablet up to your ear to take a call looks neither cool nor fashionable. However, that's not the point of this tablet. The simple fact that it has a phone dialer built-into the tablet means greater flexibility in how you can use the device.

For example, I have a friend who's been waiting for a tablet just like the FonePad. Ever since the start of the modern tablet age, she's been asking me when she could buy a tablet that she could use with a headset as a phone. She wanted the larger screen, but had the distinct need of a phone as well, and she only wanted to pay a carrier one time and have one number.

To use the Fonepad in that way, the price suddenly seems downright reasonable for an unlocked 3G phone. However, the Fonepad's limitation to 3G, and not the faster 4G LTE increasingly common in the U.S., is, in part, the reason Asus won't be bringing the Fonepad to our shores (this in spite of announcing the Fonepad's pricing in U.S. dollars).

While holding the Fonepad up to my ear felt like overkill, it actually wasn't quite as awkward as I expected. And, I could absolutely see the viability of using it as a phone with either a wired or Bluetooth headset.

The tablet did feel comfortable in my small hands, with a design and weight that felt well-balanced (even though its specs are listed at the same weight as Nexus 7, the Fonepad feels slightly lighter). Fonepad has a smooth—maybe even too smooth--metallic aluminum finish, while the Nexus 7 is made of plastic and has a rubberized back.

To get to the SIM card and microSD card (missing from the Nexus 7), you have to pull off the top edge of the tablet, an area right above the camera. It's doable, but might seem a bit awkward for the average person not used to exposing their device's innards.

The Fonepad shares many characteristics with the Google Nexus 7 tablet, which is manufactured for Google by Asus, including a 1280 by 800 display and 1GB of RAM. The Fonepad is a mere $50 premium over Google's Nexus 7 tablet; which lacks a phone, but starts with 16GB of memory, instead of the Fonepad's 8GB.

Aside from cosmetics, the biggest difference between the two lies with the processor. The Nexus 7 has Nvidia's quad-core Tegra 3, while the Fonepad has Intel's slower single-core Clover Trail Atom processor inside, which was announced at CES 2013. In my casual use here I didn't discern dramatic performance differences, but I suspect I would see larger differences when using the tablet for gaming or other processor-intensive multimedia apps.

Asus says the Fonepad will get about 9 hours of battery life during mixed use, including play back of high-definition video.The tablet on display in Barcelona was running Android 4.1.2; the most recent version of Android is 4.2. Asus expects different regions may get slight variations on specs; the European model shown lacked a rear camera, while the Asian version is going to have a 3 megapixel rear camera.

Fonepad is due to ship in March in Asia for $249, and in Europe for EUR 219 in April. Here's hoping Asus changes its mind about offering the Fonepad in the U.S., because this tablet's versatility provides something other tablets lack today.