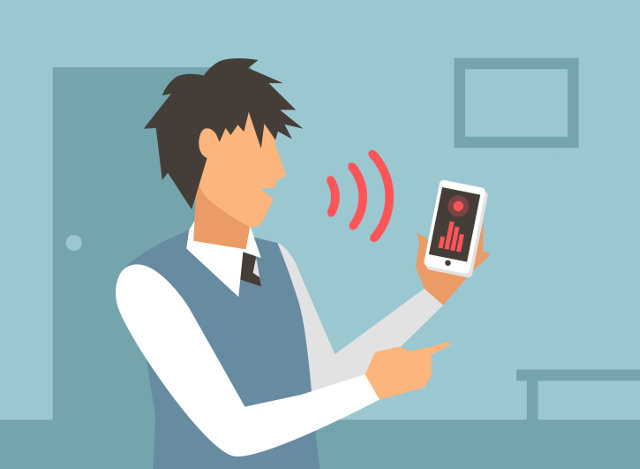 What smart virtual assistant is more intelligent than Apple's Siri, Google Now and Microsoft's Cortana? A new contender on the scene from SoundHound, simply named Hound.

Hound works just like the voice-powered virtual helpers from Microsoft, Google and Apple. You can engage in a Q&A with it and make it do your bidding through spoken commands. But Hound races ahead of the pack in performance, working faster and offering better capabilities than the big three. 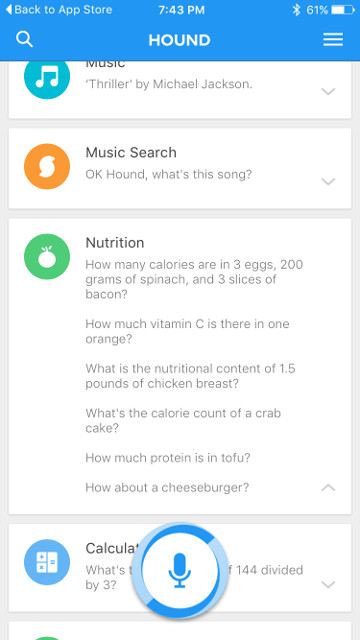 Hound is smart enough to process complex questions. You can bark out a string of related questions such as “How many calories are in three eggs, 200 grams of spinach and three slices of bacon?” Hound will fetch the answers just a few moments later.

Hound also listens for follow-up queries and answers within context. So when you can ask Hound about the nearest Italian restaurant with free Wi-Fi, you can then instruct Hound to skip those that serve only pizza. Ask “What hotels in Seattle are available this weekend that cost less than $300?” Then ask Hound to list the cheapest rates first  and then ask it to further narrow the list to those with at least three stars that are also pet-friendly.

Hound can even obtain Uber fare estimates and book a ride without your ever needing to open the Uber app. Ask Hound to translate a sentence in Spanish, and it does so nearly as quickly as you can speak it.

Most virtual assistants first convert your speech to text and then try to understand it. According to SoundHound CEO Keyvan Mohajer, Hound uses a more direct approach in processing speech, using a unique methodology based on natural language processing. Hound foregoes the text conversion step and, instead, processes spoken speech as spoken speech.

Despite being a work in progress, Hound's impressive speed and functionality make it a formidable alternative to the big three. Try out Hound for yourself. It’s available free for both Android and iOS.

I searched the App Store on my iPad and iPhone and am unable to locate Hound.  Any other suggestions for a search?

The full name of the

The full name of the app is HOUND - Voice Search & Assistant, hands-free speech recognition and the developer is SoundHound. Here’s the link to the page for iTunes https://itunes.apple.com/us/app/hound-voice-search-assistant/id1032432287?mt=8

I found the hound app at the apple store without a problem.  When I requested install it wanted me to authorize purchase on my credit card.  So either the app is not free or Apple has a charge.  I never saw the amount of the requested charge.  But then, I would not authorize the purchase.  If I had I might have seen the purchase amount at that time.  Bottom line I could not install the app without it.

Yup, same deal here….and I would imagine if you clicked the link via this page Techlicous is probably getting a scheckle or two on the purchase.  So why not tell us what the cost is?

There is no cost for

There is no cost for the app and we are not getting paid to write about it. We adhere to a strict policy of disclosing sponsored posts at the top of any story that has been sponsored.

The app is free, as

The app is free, as you can see on this listing page for iTunes. https://itunes.apple.com/us/app/hound-voice-search-assistant/id1032432287?mt=8

And, there are no in-app purchases. You must not be finding the right Hound app.

Make sure you’re downloading the HOUND - Voice Search & Assistant, hands-free speech recognition by the developer SoundHound and that the icons match.

I tried it for a

I tried it for a while and don’t think it is superior to Siri! Sorry! I had also gotten it from the app store for free with no problem!

Isthere a cost to. Install and use app. Soud hound or jound.

After reading the above article I thought I’d try it out on my Moto X.  Downloaded it and installed just fine. Setup went great.  Played with it a bit and left it alone.  About 5-10 minutes later an error message popped up that one of the Motorola display services had quit.  I powered down the phone to restart it and it has YET to power up again.  It powers up to the Motorola “M” symbol and “Powered by Android” and that’s it.  Booted into ROM to blow away cache and user data…rebooted….same issue.  This app may have ZERO to do with what I’m experiencing, but all was fine prior to installation….just thought I’d share in case someone else was thinking of doing the same on their phone.

I'll check it out on

I’ll check it out on the Moto X have. Which version of Android is loaded on your phone?

It was Verizon's lollipop....don't know

It was Verizon’s lollipop….don’t know because the phone won’t boot to that level..

Have you tried rebooting in safe mode? There are directions here for Verizon Moto X http://www.verizonwireless.com/support/knowledge-base-83017/

I went through that...I even

I went through that…I even did the Recovery mode where I wiped the cache and user data with the same results….went to Verizon and thankfully they are sending me a replacement.

I found the hound app at the apple store without a problem.  When I requested install it wanted me to authorize purchase on my credit card.  So either the app is not free or Apple has a charge.  I never saw the amount of the requested charge.  But then, I would not authorize the purchase.  If I had I might have seen the purchase amount at that time.  Bottom line I could not install the app without it.

The Hound app is free

The Hound app is free and there are no in-app purchases. Perhaps you tried to download the wrong app.