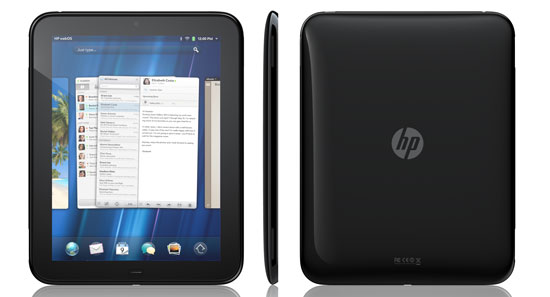 Now that HP's plans for the TouchPad Tablet have been revealed, it's tough to see how the world's leading laptop manufacturer expects to make a significant dent in Apple's backyard or take on Google .

In terms of size and basic capabilities, the HP TouchPad is very similar to the current iPad, the Motorola Xoom and Samsung's 10-inch Tab . It has a 9.7-inch capacitive touch-screen with a 1024 x 768 resolution, weighs in at 1.6 pounds, and measures a little over half an inch from front to back. The HP TouchPad has the front-facing camera for video calling that the current iPad lacks, but we fully expect an upgraded iPad with camera before the first TouchPad arrives this summer. The Xoom and Tab both have front-facing cameras.

The HP tablet runs webOS, the operating system it acquired when it bought Palm last year, and webOS supports true multitasking, meaning it can run more than one program at the same time. Apple's iOS offers some multitasking, but not all programs can use it, and when a running program wants to get your attention, it interrupts whatever else is going on.

The TouchPad also supports Flash, the web standard for online video, which has been banned from the iPad. When it comes to app development, though, webOS has a lot of ground to make up versus iOS and Android.

We know that it will ship first in a Wi-Fi only model, with a 3G version coming later this year. However, the bottom line is that we don't know the bottom line – HP hasn't announced pricing for the TouchPad. If HP can undercut the iPad price tag by a substantial amount, there is certainly pent-up cost-conscious consumer demand to be filled. Given the current booming state of Android app development, though, and the flood of competing Android tablets headed this way, we're not sure there's a compelling selling proposition here.