iPhone Lock Screen Exploit Has Siri Spilling All Your Secrets 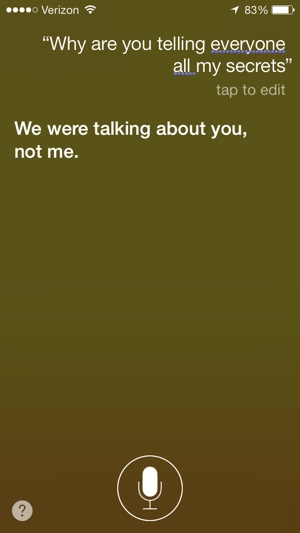 You can do a lot in iOS 7 from the lock screen. In a way, that’s handy – I like being able to access my flashlight at night without having to punch in a security code first. But it’s only handy so long as my personal information stays safe.

Unfortunately, a major privacy flaw in iOS 7 being reported on by the Naked Security blog lets anyone access your home address, send emails on your behalf, make phone calls and send texts, post to Facebook and even spill the beans about the last person you talked to on the phone. And all it takes, shockingly enough, is holding down your home button long enough to access Siri.

See, Siri can do all those things for you if you ask her to. And that’s fine, so long as you’ve unlocked your phone and proved you’re you. Unfortunately, Siri’s not smart enough to know that being accessed on the lock screen should be a special situation, and that she shouldn’t offer up personal information about you to strangers.

The good news is that it’s easy to keep Siri off your lock screen. To do so, tap Settings, and then choose General. Scroll down until you see Passcode Lock, and then tap that. Enter your code when prompted, and you’ll have access to a new menu that lets you choose what you’d like available when your phone is locked. Obviously, we recommend setting the Siri toggle to the “off” position.